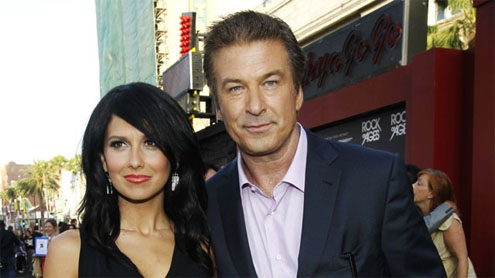 Alec Baldwin and his yoga instructor fiancee tied the knot Saturday in a New York City church, with a guest list that included family and famous Hollywood pals.

The two began dating last year and became in engaged in April. Baldwin was previously married to actress Kim Basinger; they have a daughter, Ireland, who attended the wedding Saturday in a slate silk chiffon gown also designed by Amsale.The reception was being held at New York University’s Kimmel Center.

The “Rock of Ages” actor warmly received congratulations from well-wishing fans on his way in for the service, said his friend and publicist, Matthew Hiltzik.Hours before the ceremony, Baldwin tweeted lines from an Emily Dickenson poem. One read: “Was bridal e’er like this? A paradise, the host, And cherubim and seraphim The most familiar guest.”

The wedding came about a week after Baldwin and a news photographer got into a scuffle outside of a courthouse where the actor was believed to have been picking up a marriage license. Baldwin and the photographer traded barbs over who shoved whom; no arrests were made. – Khaleejnews