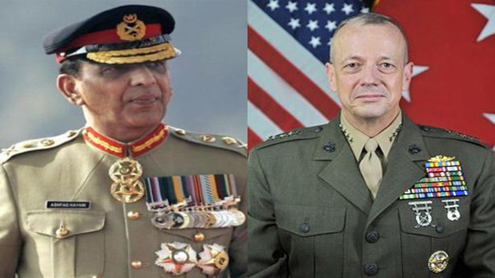 ISLAMABAD – ISAF Commander General John Allen met Chief of Army Staff General Ashfaq Kayani on Sunday in yet another attempt to find a way out of the Pak-US frost and his arrival will likely be followed by a crucial meeting of the Defence Committee of Cabinet (DCC) later in the week that might take a decision on reopening supply to NATO forces in Afghanistan.

Sources said Gen Allen discussed all thorny issues with his Pakistani counterparts, including the US apology over the Salala checkpost strike and restoration of NATO supplies. Besides General Kayani, Foreign Minister Hina Rabbani Khar and Finance Minister Abdul Hafeez Shaikh were also present in the meeting, which was attended by the US deputy secretary of state and US Ambassador Cameron Munter. On the other hand, Pakistani Ambassador to the US Sherry Rehman is also arriving in Pakistan today (Monday) to brief the country’s civilian and military leaders on her meetings with senior officials in the Obama administration and US senators in recent days. Sherry will also be attending the DCC meeting, which is expected to take place in the next few days.

After intense diplomatic efforts and negotiations through informal channels between Islamabad and Washington, considerable progress has been made on NATO supply and other contentious bilateral issues and authorities in both capitals seem optimistic about the imminent breakthrough in Pakistan-US relations. Sherry’s visit to Islamabad is being called extremely important and a diplomatic source went to the extent of saying that she was likely to discuss with Pakistani leadership some version of a “soft apology” that could be tendered by the US over the Salala airstrike, in case of an agreement between the two sides. It was after the Salala strike in November 2011 that Pakistan blocked NATO supplies and Pakistan has been demanding a public US apology over the incident ever since.

But the US, which indicated in February of tendering an apology, is no more willing to oblige Pakistan on this count. “The two sides have been looking into some soft version of a US apology and Sherry is likely to discuss the vital issue with the leadership in Islamabad along with the feedback of important meetings that she had in Washington in recent days,” a source said, seeking anonymity. He said that in light of in-house Pakistani consultations, a DCC meeting would be convened to take a decision on NATO supplies, adding that in case it was decided to resume the supplies, the strained ties between Islamabad and Washington could be put back on the track. Another Pakistani official said the DCC meeting would be held soon, but reiterated Pakistan’s stance that any breakthrough on stalled NATO supplies was possible if the US came up with an apology over the airstrikes.

He confirmed that both sides had been discussing the issue of apology intensely in the last few days and they had also shared some versions of the draft for the purpose, though he wouldn’t tell whether a consensus had been achieved on the language of any draft that was expected to come from Washington. Drone kills 8 in NWA

PESHAWAR: At least eight people were killed and five others were injured in a drone strike on a compound in Dray Nishtar area of North Waziristan’s Shawaal tehsil on Sunday. Officials in Miranshah, headquarter of North Waziristan, said that suspected militants had converted an abandon house into a compound in Dray Nishtar, which was targeted by the US drone with two missiles. As a result, the compound was completely destroyed, killing eight people. The officials said five others had been injured in the strike. The identity of those killed could not be confirmed so far, but the officials suspected they included local and foreign militants.-Pakistantoday