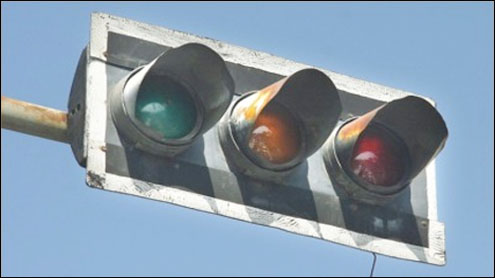 signals out of order in Karachi

KARACHI: The new budget of Karachi Metropolitan Cooperation (KMC) for 2012-2013 has been announced lately, whereas the streetlights and traffic signals at the busiest arteries of city are still out of order despite having adequate budgetary allocations for the last fiscal year for getting faulty lights and signals repaired.

The Mauripur road is the city’s major route on which thousands of heavy vehicles ply every day, but it still lack facility of streetlights. The Mauripur, a major thoroughfare of city, which is linked to commercial hub of the city, plunges into darkness after sunset, where most of the erected street lights have been out of order for the last several months due to which many people had lost their lives in mishaps.

A passerby told Daily Times in a very lamenting mood: “I used to pass by MA Jinnah Road to reach my destination where non-functional traffic signals encourage drivers to violate traffic rules and that creates serious traffic problems.” Why the authorities concerned are not paying attention towards repairing these traffic signals,” he questioned. The signals on these roads often remain dysfunctional, whereas at some signals personnel of traffic police are deployed while there are none at most of the signals to control heavy flow of traffic.

According to defunct CDGK budget documents about 175 traffic signals are being operated in the city with 114 of them maintained by the Transport and Communication Department (TCD) for which Rs 20 million was allocated in the year 2010-11 and the amount was increased in the budget 2011-12 at Rs 65 million.

A high official of General Technical Services KMC told this scribe they are conducting survey to determine the positions of faulty signals and streetlights. The major problems facing KMC is the theft of the cables from streetlights and traffic signals polls, he said, adding that disruption in timely cash flow to department concerned is the other reason, which has brought the repairing and maintenance work halted. – Dailytimes

Tags: budget of Karachisignals out of order in Karachi
Previous Post