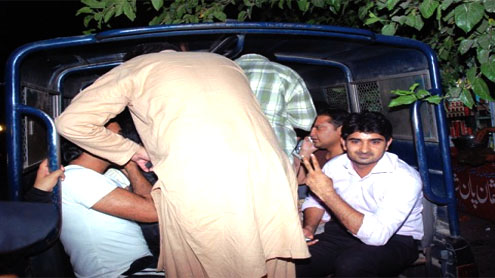 LAHORE: Faced with continuous defiance of the young doctors, the Punjab government Sunday ordered crackdown on the leading agitators, besides deciding to blacklist the unruly YDA members and sacking 24 of them.

The doctors protesting under the YDA (young doctors association) banner reacted with abandoning their services at emergency wards and indoor department of many hospitals across the province.They had already forced shut OPDs (outdoor patients departments) at almost all the hospitals and have been holding protest demonstrations for the past 14 days, creating a deep crisis at the public sector hospitals of the province.As the talks between the YDA and Punjab government failed, the government also ordered a crackdown to tame the real troublemakers among the YDA ranks.At late night raids, the police arrested the main leadership of the young doctors.

In all more than 70 doctors were nabbed from Services Hospital, Doctors Hospital and Punjab Institute of Cardiology.The YDA senior office bearers namely Dr Hamid Butt and Dr Aamir Bandesha were also detained and shifted to the Ghalib Market. Minutes after the police started the operation the YDA announced complete strike across the Punjab, especially at Emergency Centres of Public Hospitals, from Monday (today). It also announced to go ahead with its plan to besiege the CM House on July 5.The doctors had already forced shut OPDs (outdoor patients departments) at almost all the hospitals, but after the police crackdown they stopped providing medical care to the patients at the indoor wards and emergency wards of many hospitals, including the Punjab Institute of Cardiology (PIC).

To keep these vital sections of the hospitals functions the government called in the senior doctors to look after the patients there.After the collapse of talks, a notification of removal from service of 24 leading agitators was issued late Sunday night. The health department also ordered the doctors to call off their strike, warning that those who would not report to duty on Monday morning (today) will be dismissed from their service and blacklisted.According to the plan, the list of the blacklisted doctors would be sent to the British College of Physicians and foreign embassies across the globe so they could not practice abroad as well.Moreover, the department has invited applications from the new graduates to fill in the gap.

From those who have been appointed recently the department has taken oath that they would not observe any strike or take part in any protest, warning them that they would be sacked otherwise.The senior doctors have expressed their willingness to serve in outdoor wards from Monday (today). And the government has assured they would be provided proper security so they are not harmed by the young troublemakers.Earlier, on Sunday the negotiations between senior doctors and the striking young doctors failed as the YDA refused to call off strike after the former failed to give any assurance to the latter regarding implementation on the proposed service structure for doctors in the province.The young doctors have put forth three conditions to end the strike and want a personal commitment from Punjab Chief Minister Shahbaz Sharif of fulfilling their demands.

The demands are: appointment of medical officers (MOs) directly in Grade 18, stipend of postgraduate trainees equal to that of MOs and making health professional allowance equal to basic pay.A senior police officer said that before the operation, the Lahore CCPO, DIG Operations and all the divisional SPs held a meeting at 7-Club Sunday evening and planned the crackdown on the doctors. Subsequently, a well-coordinated operation was launched by the Civil Lines, Model Town and Iqbal Town police divisions at around 11pm.An eyewitness said that heavy police contingents entered the Services Hospital under the command of Civil Lines SP Omer Saeed Malik and broke down the doors of rooms where the YDA office bearers were holding their final meeting to decide whether they should continue the strike.

Racecourse Circle Deputy Superintendent of Police Safdar Raza Kazmi told Media that around 40 to 50 doctors were arrested from the Services Hospital. He said that police wanted to handle the situation peacefully but when the doctors resisted, they broke down the doors.“They have been shifted to the Ichhra, Model Town, Ghalib Market and Civil Lines Police Station,” he added. To a query regarding charges to be framed against the doctors, the DSP said, “Definitely, they would be charged for criminal acts like misuse of authority and unlawful refusal to attend the patients.”While, the strike of young doctors has entered its 14th consecutive day on Sunday, the patients’ difficulties have been increasing with each passing day despite the corrective measure taken by the government.

According to a notification of Punjab government, the outdoor patient departments (OPDs) of government hospitals remained opened in Rawalpindi though the number of patients was low due to Sunday.Heavy contingents of police were deployed for the safety of the doctors who came on duty. The army doctors have taken charge in government hospitals while the government has announced that appointment of ad hoc doctors will be made through walk-in interviews.A total of 150 doctors from Pakistan Army, requisitioned by Punjab government, would be taking their job in different hospitals in Punjab on Monday (today) to counter the strike and ensure provision of treatment services to the patients in the hospitals.

The doctors from Pakistan Army have started reaching different hospitals of Punjab to begin serving helpless patients on Sunday, as according to the schedule 15 doctors would perform their duties in each hospital. Besides, as many as 454 Women Medical Officers (WMOs), who have been recruited through Punjab Public Service Commission (PPSC), will also take their charge in different hospitals in the province. Moreover, Punjab Health Department has also decided to the award appointment letters to at least 1,000 doctors awaiting postings in the hospitals. – Nation