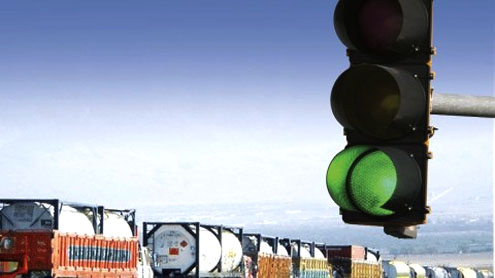 Islamabad: After months of wrangling over the reopening of NATO supply routes, Pakistan has finally made up its mind to reopen the key land routes and a decision in this regard is most likely to be made during the DCC meeting being held today (Tuesday).

However, the announcement in this regard is most likely to come on Wednesday following an approval by the federal cabinet, it has been reliably learnt. The DCC meeting would be attended by the ministers of defence, foreign affairs, interior and information.The CJCSC, services chiefs, principal secretary to PM, secretaries of the cabinet and defense and foreign affairs, ISI director-general, director general military operations and the Intelligence Bureau director general would also be attending the meeting.

Meanwhile in Brussels, NATO Secretary-General Andres Fogh Rasmussen expressed hope that Pakistan would reopen the NATO supply route soon. “Ambassador Sherry Rehman has arrived here. She will brief the DCC about her meetings with the US officials. Prime Minister Raja Pervaiz Ashraf has convened the meeting of Defence Committee of the Cabinet (DCC) for today while federal cabinet meeting the following day – on Wednesday – to take a final decision in this regard,” said a well-placed source.The source said the prime minister visited the Presidency on Monday and briefed Asif Zardari on the outcome of the dialogue process between Pakistan and the US. Earlier in the day, the source said Hina Rabbani Khar and Hafeez Shaikh called on the prime minister and briefed him on the talks held with the US delegation.

“During the meeting, Gen Allen was assisted by the US Deputy Secretary of State Thomas Nides and Ambassador Cameron Munter. Besides financial issues, both sides also discussed a draft of the US apology over the Salala attack. The DCC would also discuss the draft and a final decision would be made in this regard,” the source added.Another source said the US had assured Pakistan that it would release the CSF’s first installment of $400 million within a week’s period, while the remaining $400 million would be dispatched later.

An official of the Finance Ministry said on condition of anonymity that the first installment would be transferred to the government’s bank account in New York.Earlier, Foreign Office spokesman Muazzam Khan said there had been no final decision on NATO supply, however, discussions had been positive.Following a November 26, 2011 attack on the Salala checkposts that left 24 Pakistani soldiers dead, the government blocked NATO supply to Afghanistan until the US apologised for the attack. – PT