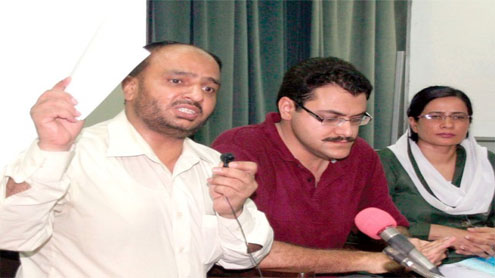 LAHORE: Showing solidarity with young doctors, senior doctors, nurses and paramedical staff at the Punjab Institute of Cardiology (PIC) announced closure of all hospitals departments, except the emergency ward, and demanded that young doctors be released immediately.

Addressing a joint press conference at PIC, Medical Teachers Association (MTA) President Dr Ijaz Ahsan said that senior doctors were withdrawing their services from all departments, including outpatient (OPD) and indoor departments.Representatives of the Paramedical Alliance of PIC and Young Nurses Association (YNA) also supported MTA and announced that they would stop working at PIC.

Dr Ahsan said that young doctors are the backbone of healthcare system. He said doctors currently deputed at PIC were not trained and could not handle heart patients. “It takes a doctor 10 years to do FCPS and then another five-year training to become a cardiologist,” he added.

He said senior doctors could not do “rigorous work for 24 hours and that is why we are demanding that our doctors should be released immediately”.Meanwhile, the provincial government decided to set up camps at all government hospitals to provide swift and timely medical facilities to the surging number of patients.

According to a Health Department spokesman, the decision to set up camps at hospitals was taken in the backdrop of young doctors’ strike.The spokesman added that 125 fresh doctors had taken charge at teaching hospitals of Lahore while Pakistan Army doctors and specialists were providing treatment to patients at OPDs and emergency wards of all hospitals. – Dailytimes