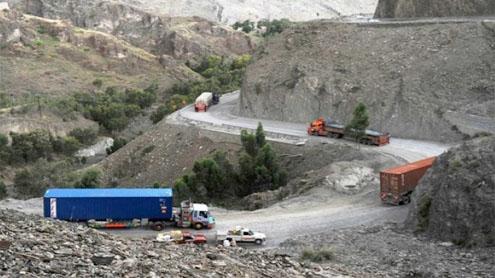 ISLAMABAD: A pair of trucks carrying NATO supplies crossed into Afghanistan on Thursday, Pakistani customs officials said, the first time in more than seven months that Pakistan has allowed Western nations to use its roads to supply troops in Afghanistan.

Customs officials said the container trucks had passed through the Chaman border crossing into southern Afghanistan, a milestone following a deal this week with the United States ending the impasse triggered by the killing of 24 Pakistani soldiers by US aircraft last November.“We received orders yesterday to allow NATO supply trucks through, but security officials hadn’t received their instructions,” said Imran Raza, a customs official.

“They received their orders today, and now two trucks have crossed the border into Afghanistan.”The resumption of NATO transit into Afghanistan came two days after US Secretary of State Hillary Clinton, yielding to Pakistani demands, told Pakistani Foreign Minister Hina Rabbani Khar the United States was sorry for the deaths last November.In response to the killing of the soldiers in a border post, a furious Islamabad shut the supply routes.

For months, the Obama administration refused Pakistani demands to offer an apology for what NATO said was a regrettable accident.The closure forced NATO countries to bring in supplies into landlocked Afghanistan through an alternate route to the north, a cumbersome process that cost 2-1/2 times as much as shipping them to and then across Pakistan.

NATO commanders said the route closure did not affect operations in Afghanistan, where foreign troops battle the Taliban more than 10 years after the war began. But they acknowledged it could have become more problematic once NATO nations begin to withdraw in earnest ahead an end-2014 timeline for removing most foreign troops.

The deal struck this week on the routes could go a long way to easing tension between the two countries.While Pakistan got the apology it wanted for the November border killings, the government agreed to drop demands to raise fees on supply trucks going into Afghanistan. – Thetribune