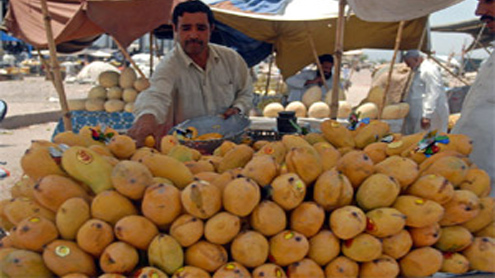 KARACHI: Pakistan is considered as a country, lagging behind the developed world regarding science and technology, but the situation was not as much worst as seen, because Pakistan has an edge in treatment of mangoes and its shelving.

Mango is a well-regarded fruit and is known as ‘King of fruits’. Mango appears in local markets as the summer season commences.  Globally, it is one of the most eaten fruits. As many as 11 countries, including Pakistan export mangoes. To meet the global standards, mangoes are treated before export. There are four ways of treatment, out of which three are recognised across the world: hot water treatment (HWT), vapor heat treatment (VHT) and radiation.

There are nine types of bacteria that prevail in mangoes. To kill all of those, in most common way of hot water treatment, mangoes are treated with hot water for one hour, during which the temperature is managed at 75 degree centigrade. Resultantly, the pores at mangoes surface get rupture and its shelving become difficult. Pakistan has a double edge in regard with treatment and shelving of mangoes. The country has a capacity to treat 15 tonnes of mangoes per hour. Besides this, Pakistani private sector has ability of shelving mangoes for 35 days after treatment, however, the rest of exporter countries could shelve mangoes for maximum seven days.

Recently, Pakistan has achieved another significant achievement in export of mangoes sector. Pakistani has recently initiated to export mangoes to China, which itself is the second largest producer and one among the largest consumers of mangoes. Though China itself produce mangoes in massive quantity, it still is a vast market for Pakistani mangoes as locally produced mango is small in size and less sweet, however, Chinese people like larger in size and sweeter mangoes and Pakistani types of mangoes all their desired qualities.

AQ Khan Durrani, the owner of treatment plants in Pakistan and exporter of mangoes to China, said while talking to the Daily Times that China is biggest country in term of population and is 2nd largest producer of mango in the world with production of 4.5 million tonnes of mangoes annually. Chinese people like mangoes a lot and while exploring this big market of ‘mango lovers’, Pakistan can earn millions of dollar in fruit sector.

“China can be the biggest market of Pakistan mangoes and within three years Pakistani export can be doubled,” he added.  It is pertinent to mention here that the Pakistan produces 1.6 to two million tons of mangoes annually and was ranked fourth to fifth among producer countries of mango. The dire need of hour is that the government should follow and respond to the achievements and strive of private sector, which is going to explore even largest producer countries of mango as consumer market.Pakistan would become the largest producer and exporter of mangoes due to the quality of local mango, if the government supports the sector. This also would result in very positive impacts on local economy and the position of the country as well.-Dailytimes