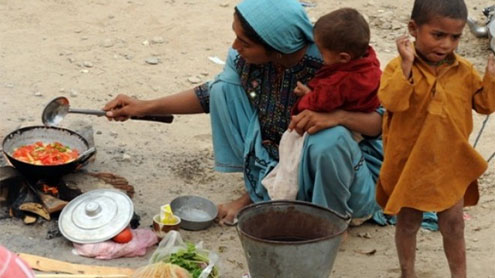 Health experts and other speakers were speaking at the inaugural session of a multi-sector nutrition workshop organised by the Plannning and Development (P&D) department of the Balochistan government in collaboration with World Health Organisation (WHO) at a local hotel in Quetta on Monday.Additional Chief Secretary Meeran Jan Kakar and representatives of Health, Education, Agriculture, P&D, Food, Population, and Finance Department attended the workshop.

“There is a dire need for taking drastic measures to form a multi-sector approach to address the issues of malnutrition and food insecurity,” said Dr Amjad Ansari adding that indicators of health statistics in Balochistan are alarming with not much attention given to its improvement and reversal of the prevailing situation.Referring to the basic facts, regarding malnutrition in Balochistan, he said that 58.2 per cent of household heads in Balochistan are illiterate whereas 82 per cent of the women do not even have basic knowledge about malnutrition and other health issues, worsening the already grim situation.

Stressing the need for coordination among the nutrition related sector including Agriculture, Food, Nutrition, Hygiene, the WHO technical advisor Dr Khizar Ashraf said that combined approach against the menace of food insecurity and malnutrition would yield desired results.He added that there is a need to give utmost priority to nutrition and to adopt a multi-sectoral approach in addressing malnutrition and food insecurity. Dr Ashraf further said that a multi-pronged strategy is required to work out on short-term, medium-term and long term targets taking along all nutrition related sections.

Referring to the long-term interventions in combating food insecurity in Afghanistan and Nepal, he said that we could also benefit from their experience.“If Afghanistan, despite the challenge of a deteriorating law and order situation, could move forward in malnutrition betterment, then Pakistan is in a much better situation to tackle the issue effectively,” he stressed.Dr Ashraf opined that joint endeavors of the education, health, food and agriculture departments along with the civil society would help overcome the issue of malnutrition.

Additional Chief Secretary Balochistan Meeran Khan Kakar said that recent cases of severe malnutrition reported from Adanji area of Khuzdar district were not good indicators for the provincial government.“A concerted strategy should be evolved to reverse the situation,” underlining the need for creating awareness among the masses to fight back the health issues caused by the malnutrition.