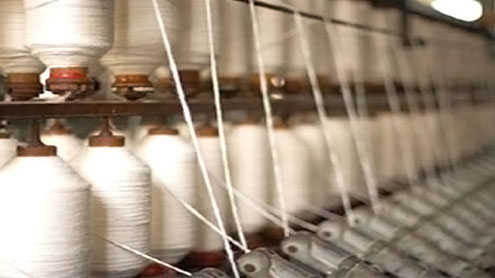 LAHORE: All Pakistan Textile Mills Association (APTMA) spokesman Aneesul Haq has said that 22-member delegation of APTMA representing all regions under the leadership of its chairman Mohsin Aziz, along with zonal chairmen and vice chairmen, is setting up five days camp in Islamabad to resolve the textile industry issues with the government.

While in Islamabad, the APTMA delegation will call on the president, prime minister, ministers for textile industry, water and power, and petroleum and natural resources.The spokesman said as many as 57 textile mills prime users of electricity on independent feeders having hardly 135 megawatts (MW) load, have been subjected to six to eight hours industry load shedding causing one shift layoff since the last 60 days. He said the government, in view of the severe electricity shortage, had asked APTMA to cooperate, which it did at the cost of layoff of 150,000 workers. The APTMA delegation will call on the minister for water and power with a plea that the textile mills on independent feeders should be exempted from load shedding.

APTMA spokesman Aneesul Haq said the APTMA delegation will also hold meeting with minister for textile industry to represent way forward for growth and investment in textile industry under Technology Upgradation Funds Scheme (TUFS) to mitigate the impact of high interest rates. He said APTMA has already proposed to the government for 100 percent refinance for the export-oriented textile industry across the value chain including spinning and weaving industry. The loans of textile industry have touched lowest ebb of 7.0 percent of Rs 7 trillion, which amounts to hardly Rs 500 billion mainly due to energy crisis.

The textile industry in Pakistan has been waiting on the sidelines of energy crisis in the absence of textile policy initiatives by the government. While the textile industry in Bangladesh and India kept on growing with availability of funds at concessional rates as against around 14 percent in Pakistan since last four years. However, he said, still the effort is on to control inflation through keeping high interest rate. Rather, it is destroying the economy as both growth and employment rate continued falling to below zero percent.

The textile industry being export-oriented cannot export inflation, thus it requires a sector specific intervention for its growth, he added.He further said that APTMA has proposed that either the government should reduce interest rate to 8.0 percent or extend the facility of 100 percent export refinance to the industry ahead.Haq has expressed the fear that both the investment and industry viability would be hit hard as there is no BMR of $5 billion in next three years to maintain production capacity of $15 billion. He said last BMR took place back in 2005.