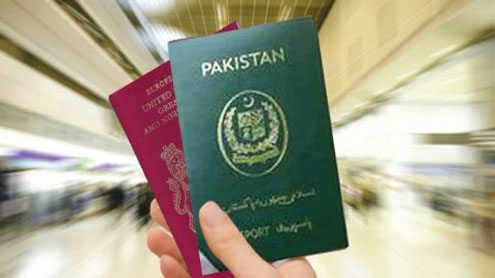 ISLAMABAD: The dual nationality bill faced stiff opposition from all quarters when it was presented in the Senate on Tuesday.

The Pakistan Muslim League-Nawaz, coalition partners and some members of the ruling Pakistan People’s Party expressed their reservations over the bill presented in the Senate by Law Minister Farooq Naik.The PML-N and Awami National Party, which is an ally of the government, staged a walkout from the House to mark its protest against the bill. Earlier during the session, ANP Senator Haji Adeel said Pakistan’s agreements with 16 countries regarding dual nationality should be presented. Adeel questioned if someone who had Pakistani nationality could become the US president or a parliamentarian in another country.

Senior PPP leaders Aitzaz Ahsan and Raza Rabbani also expressed their reservations over the bill.Ahsan said when someone took oath as an American citizen they had to renounce other nationalities. “It is written in the US citizenship oath that a person can also take up arms in defence of the country.” Senator Rabbani asked for a review of the dual nationality agreement with the US. Reservations were also expressed by MQM Senator Tahir Mashadi, who said he would inform the standing committee about his reservations.

ANP’s Haji Adeel said he would not accept the chairman’s ruling of referring the bill to the Standing Committee on Law and Justice without permission of the House. This led to an exchange of harsh words between the two.The opposition and the ANP said the government wanted to bulldoze the bill for the sake of some corrupt people.

Raja Zafarul Haq and other opposition members said the PPP was giving bogus arguments against the constitution framed by its leader Zulfikar Ali Bhutto.He questioned if a foreign government appointed a dual nationality holder to higher positions. He referred to Moeen Qureshi and Shaukat Aziz, holders of dual nationalities, who were made prime ministers and then left the country with their “briefcases”.

“A direct result of this is that in those countries persons holding dual nationalities/citizenship can exercise the right of vote and can also run for parliamentary elections” Naik said, adding that, “Our country’s economy has always been considerably supported by overseas Pakistanis, whose allegiance to Pakistan should not be in doubt.” He said it had been a long-standing demand of the overseas Pakistanis that there should be no impediment in their way to run for elections for parliament and they were deeply concerned with events in Pakistan and were keen to play an effective role and wanted to contribute to national cause.

Later in the session, Senate Chairman Nayyer Bokhari referred the dual nationality bill to the parliamentary committee on law and justice. Also on Tuesday, a bill regarding review of Supreme Court decisions was presented in the National Assembly by MQM MNA Abdul Qadeer. The ANP outright announced not to support the bill. Senator Aitzaz Ahsan and Raza Rabbai also expressed their reservation over the bill. While presenting the draft, Qadeer said that if parliament found flaws or lacuna in the Supreme Court’s decision, it should have the right to discuss and review it. – PT