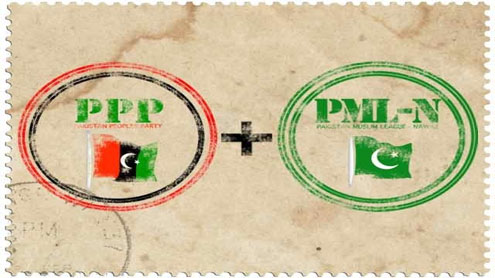 ISLAMABAD: After having reached an amiable consensus over a new chief election commissioner, the country’s two largest political parties are now said to be planning to open talks for bringing in a caretaker setup to oversee general elections. Both are said to want fresh parliamentary polls to be held within this year.

Much is at stake – if the proposed negotiations between the governing Pakistan Peoples Party (PPP) and opposition Pakistan Muslim League-Nawaz (PML-N) succeed, the outcome is likely to be the first civilian-to-civilian transition in the country’s history.“We are on it… by and large it is our resolve to make sure that the transfer of power is smooth,” a top government official told The Express Tribune on Tuesday, requesting anonymity.

The new resolve for cooperation follows the finalisation of Justice (retd) Fakhruddin G Ebrahim for the slot of Chief Election Commissioner (CEC) by a 12-member bipartisan, bicameral parliamentary panel. Ebrahim was chosen under a mechanism outlined in the 20th Amendment, approved earlier this year. The same amendment also elaborates upon the procedure for handing over powers from an elected government to a caretaker setup.

Insiders in the PML-N were more willing to offer details of what the two parties have already agreed on. One PML-N leader said the two parties would hold talks in two phases. The first phase would involve only the PPP and PML-N; the second, other groups from the ruling alliance and opposition.

PML-N insiders also said the opposition party would push for appointing new governors in all four provinces ahead of the polls because they can influence the elections, although their powers have been reduced in the 18th Constitutional Amendment.Currently, three of the provinces have governors who are members of the PPP — Punjab, Khyber-Pakhtunkhwa and Balochistan— while in Sindh the slot has been given to the Muttahida Qaumi Movement (MQM), a government ally.“This situation may not be acceptable for us… we will like to see it change ahead of polls,” a PML-N official said.

The PML-N also wants the ruling party to be clear on one particular issue – the question of who will play the role of the opposition in Sindh and Balochistan, neither of which have an effective opposition. The question remains vital because, according to the formula agreed upon under the 20th Amendment, there has to be an opposition to propose names for the leaders of a caretaker government.In the 2008 elections, the PML-N was unable to win a seat in either Sindh or Balochistan. “This is what we want clarified in the first phase of negotiations,” said PML-N deputy Information Secretary Khurram Dastgir Khan.

Insiders said the two parties also had differing opinions on how they should involve other parties into the second round of talks. Officials said the government negotiators are in favour of giving them a direct role in the talks while Leader of the Opposition Chaudhry Nisar Ali wants their involvement be more indirect.

He proposed that the PPP should separately take its allies into confidence, while the PML-N would talk to opposition groups in and outside parliament. Nisar, Senator Pervaiz Rasheed and Ishaq Dar are likely negotiators for the PML-N while the PPP team is expected to be led by Religious Affairs Minister Khursheed Ahmed Shah. – Thetribune