by Top
in Khyber Pakhtunkhwa, Pakistan
0 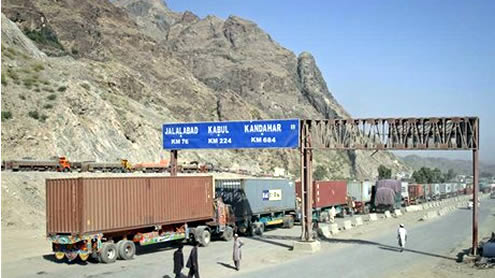 PESHAWAR, July 12: The federal government will pay Rs100,000 as daily fuel charges to police and Rs50,000 to Frontier Corps and Khasadar officials for escorting convoys of trucks supplying goods to Nato forces in Afghanistan via Torkham border.

Besides, a maximum of 50 Nato oil tankers/vehicles will be allowed daily from 5:00am to 8:00pm to enter Khyber Pakhtunkhwa at Khairabad area of Nowshera district. No vehicle will be allowed after 8:00pm to move from Khairabad onward. The convoys, in group of 10 vehicles each, will be escorted by security officials. These decisions were taken at a meeting chaired by secretary Home and Tribal Affairs Department, says a statement issued by the home department here on Thursday. The meeting directed the Peshawar Development Authority to improve condition of sections of road from Peshtakhara to Hayatabad bridge and Kohat Road flyover to G.T. Road bypass. Besides, it directed for improvement of detouring road from Hayatabad to Bara-Jamrud road on emergency basis in order to divert Nato traffic from Hayatabad and safeguard its residents from any eventuality. Three platoons of Frontier Constabulary will assist the police to guard the Ring Road, especially in areas near the tribal border.

In case of emergency the National Logistic Cell’s station at Amangarh would be made available for parking purpose. Emergency recovery station should be established from Khairbad to Peshawar and the places would be identified by police. In case of blockage, vehicles would be stopped at Khairabad until the road is cleared. Recovery vehicles/cranes would be arranged by carriage companies. The National Highway Authority would carry out patchwork from Takhta Baig (Khyber Agency) to Torkham, as the road is in a dilapidated condition. The issue of parking on Afghan side would be taken up with the Afghan government for returning vehicles with gate passes as they lead to road blockage at Torkham. Due to security situation in Khyber Pakhtunkhwa, road conditions and proximity of residential areas to the route meant for Nato traffic, no oil terminal and/or change over of vehicles would be allowed in the province. The same might be done in Punjab or in Afghanistan.

It was stated that the ministry of interior, Islamabad, would arrange a meeting of all concerned for the decision that change over of vehicles should take place either in Punjab or Afghanistan. It was decided that the NLC/NHA would establish weighing station at Khairbad to ensure that fuel is not removed en route. This will make the establishment of weighing station at Takhta Baig redundant thereby ensuring that there is no spillover/logjam of Nato traffic into Peshawar district in case of any eventuality. In order to aver any untoward incident, the ministry of interior would provide explosive detection equipment and sniffer dogs/scanners to Khyber Pakhtunkhwa police to check vehicles for improvised explosive devices before they enter the province. A committee comprising capital city police officer, political agent Khyber Agency, a representative of Frontier Corps, DPO Nowshera, and SSP (operations) Peshawar would coordinate on daily basis to ensure security to Nato supplies.

It was stated that the ministry of interior would convene a meeting to devise an elaborate coordination mechanism for transportation policy for Nato supplies in view of all the decisions of the meeting, whereupon the provincial government would then assume responsibility for security of the supplies. The stakeholders who would attend the meeting include home departments of Khyber Pakhtunkhwa and Sindh, Frontier Corps, Pakistan Customs, political agent Khyber, police department of Khyber Pakhtunkhwa and their counterparts from other provinces, Frontier Constabulary, NHA and NLC. – Dawn