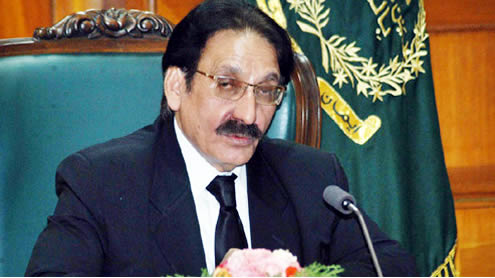 QUETTA: The Chief Justice of Pakistan, continuing the tone that has become a hallmark for him, said on Thursday that only rule acceptable is that of law and the Constitution, and the judiciary will not tolerate any unconstitutional steps taken by the executive.

Addressing the Balochistan High Court Bar association late on Thursday, Chief Justice Iftikhar Muhammad Chaudhry said that the “judiciary has been entrusted with the power to adjudge the validity of the legislative and executive actions on the touchstone of the Constitution.” He added that the Supreme Court of Pakistan, being the apex court of the country, is aware of its responsibilities and shall always administer justice and safeguard the fundamental rights. “We have taken oath to preserve, protect and defend the Constitution of Pakistan and to dispense justice without fear or favour, affection or ill-will.”

The supremacy of the Constitution and rule of law demand that all the organs of the State should function within their prescribed and well settled limits provided by the Constitution and law. The Constitution provides elaborate provisions for the system of administration of justice, including its establishment, powers and functions, etc. After restoration of the judiciary, Chief Justice Chaudhry said, the judiciary was greatly concerned about the improvement in the system of administration of justice. Therefore, the National Judicial Policy was formulated in consultation with all the stakeholders of the system of administration of justice. Elaborating, he said the main features of the new policy included “eradication of corruption, independence of judiciary, reduction of backlog of cases, etc. Improvements have been made continuously in this policy considering the ground realities and feedback from the stakeholders.”

“The policy was not imposed, rather it was implemented as a unanimous decision of all concerned,” he said proudly. This, he said, was one of the reasons of its success that every person engaged in the system and found reflection of his own thoughts in the document.  He added that implementation of this Policy has led to a significant improvement in the rate of disposal of cases at the levels of the Superior as well as District Judiciary.

Speaking on the issue of Balochistan, a case in which the Chief Justice has shown great interest, summoning the top security officials to produce missing persons, he said that today no one is safe in Balochistan. CJP lamented that human rights were being violated in Balochistan with impunity and it seemed that no one in any corridor of power was remotely interested in arresting it. Though, he added that the situation in Balochistan was not always this bad, and the dismal situation was but a passing phase. He, however, warned that the situation in Pakistan’s largest province by size was a sign of worry for the other provinces, which too did not boast conditions worth raving about either. – Tribune