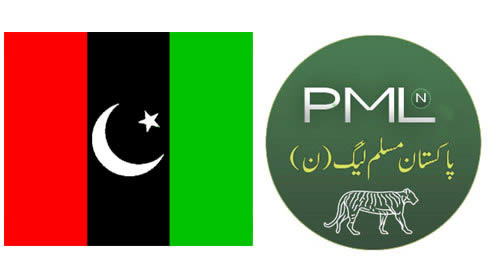 ISLAMABAD – After six months of strong confrontation between the major treasury and opposition parties – the Pakistan People’s Party and the Pakistan Muslim League-Nawaz – both “estranged” friends have once again entered into a “broad-based dialogue” for evolving consensus on the future roadmap, with talks underway for holding of general elections ahead of schedule, bringing a consensus dual nationality bill and appointment of a mutually agreed caretaker setup friendly to both the parties but hostile to their rival – the Pakistan Tehreek-e-Insaf.

The timing of the talks is crucial as it would provide a sigh of relief to the PPP leadership which has clipped the wings of judiciary by amending the contempt of court law. However, PPP Co-chairman Asif Ali Zardari has been successful in neutralizing the PML-N that has been a staunch supporter of the superior judiciary. Under the understanding between both parties, the PML-N did not put up strong resistance during the passage of contempt bill and rather offered a ‘soft’ resistance to facilitate the talks’ process. Background interactions with leaders of the PPP and the PML-N have revealed that the appointment of a non-controversial chief election commissioner nominated by the PML-N by the PPP leadership was a part of the confidence building measure, while the PML-N had responded to the PPP-led coalition government by holding no protests against NATO supplies reopening and the passage of contempt of court bill, despite the fact that tensions between judiciary and the executive had reached at an all time high.

The source added that the mysterious absence of PML-N chief Nawaz Sharif and Nisar Ali Khan from political scene of the country was also part of the game to provide the government a tangible relief. A source in the PML-N confirmed the development, saying another surprise for political pundits would soon occur as PML-N leader Ishaq Dar would be presenting some amendments to the dual nationality bill to help the government get through with the controversial piece of legislation. “Two major reasons have made the PML-N leadership review their previous stance of opposing the dual nationality bill – a request by the PPP to support the bill and the pressure by the party’s overseas wing to allow dual nationals become members of the parliament. During his recent visit to the United Kingdom, Ishaq Dar was confronted by many overseas Pakistanis at a party meeting held at Bradford. Nisar also had to face such circumstances in London which compelled the PML-N leadership to support the dual nationality bill,” the source added.

The source said the PML-N would introduce amendments to the dual nationality bill under provision that any dual national would have to revoke his/her foreign nationality if given any public office after being elected. The PML-Q and Awami National Party (ANP) have already proposed such amendments to the bill. “Now talks are underway between both parties on the dual nationality bill. Ishaq Dar and Law Minister Farooq Naik have also held a meeting to discuss some amendments suggested by the PML-N,” the PML-N source said. A PPP leader said President Asif Ali Zardari had also hinted at PPP-PML-N talks during the party’s core committee meeting held last week and the PML-N had contacted to hold talks for dual nationality bill, next caretaker set up and etc.,” he said. The PPP leader said his party believed in continuity of the democratic process and it was in talks with the PML-N for peaceful election and smooth transition of power to the next elected government.

“President Asif Ali Zardari has conveyed to PML-N chief Nawaz Sharif that after bringing in PML-N nominee as CEC, the PPP had the right to install a caretaker prime minister friendly to the government but not hostile to the PML-N. Now the PPP leadership is hunting for a man who may not give in to the apex court’s pressure on Swiss letter and follows his directions about holding general elections and remains loyal,” the source added. “We in the PPP have always faced a situation when elections were stolen and power never was transferred to us smoothly. So we want installation of a neutral caretaker setup which is not hostile to us or the PML-N. We also want to take along the PML-N who has also suffered and has struggled for revival of democratic order in the country”. The PML-N leader said Saudi Ambassador Abdul Aziz Ibrahim al-Ghadeer had also held an important meeting with Nawaz recently when the latter visited the Saudi Embassy. “Nawaz was accompanied by several party leaders to offer condolence on demise of Prince Nayef bin Abdul Aziz. But later, all the party leaders were told to leave including Ishaq Dar and Nawaz and Al-Ghadeer had a two-hour exclusive meeting,” the source said.

He added that following the meeting with the ambassador, Nawaz left for an unscheduled Umrah and was still in Saudi Arabia despite the fact that the Umrah season would start in the last fortnight of the holy month of Ramadan. “This (Umrah) thing was a mutually strategic move to absolve the government from several challenges, including NATO supplies’ reopening and the confrontation between the judiciary and executive. The mysterious absence of another hawk – Nisar Ali Khan – is also part of the deal,” the PML-N leader added. – Pakistantoday