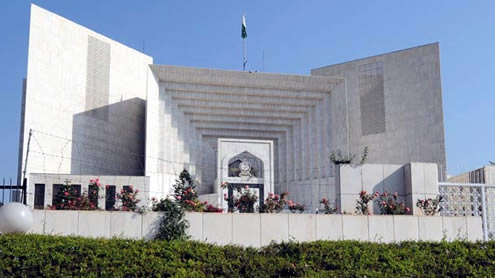 QUETTA: The Supreme Court on Friday issued notices to the federation and the Attorney General to file their response, during a hearing on a petition filed against newly legislated Contempt of Court Act 2012.

A three member bench of the Supreme Court headed by Chief Justice Iftikhar Mohammad Chaudhry and comprising other two members Justice Jawwad S. Khawaja and Justice Khilji Arif Hussain heard the petition filed by Baz Muhammad Kakar. The petitioner, during his arguments, said that the bill was in conflict with basic clauses of the constitution. “Article 2A guarantees freedom of the judiciary while according to Article 25, all citizens have equal rights,” he added.

The chief justice, during the hearing at the SC’s Quetta registry, remarked that the ‘people’ who are responsible to run the country must be able to protect its constitution also. “After hearing petitioner’s arguments, it feels like the court will issue a right verdict in this case also, however, it would be abandoned later on in the evening,” the CJ added. Renowned legal expert, Athar minallah, during his arguments, said that according to Article 190, executive are bound to act under the constitution. The bench ordered to combine all petitions of such sort (filed against the contempt of court act 2012) and adjourned the hearing to July 23. It said:

“Let notice be issued to the respondent/ Federation as well as to the Attorney General for Pakistan in terms of Order 27-A CPC to examine inter alia the questions raised in the listed petition.” “The respondent(s) and the Attorney General may file concise statements if advised and desired, before the next date of hearing and the pleadings shall be exchanged between the parties before the commencement of the hearing of the petitions. In view of the importance of the petition as it has been pointed out by the learned counsel for the petitioner in the application for the fixation of the case today and also taking into consideration the involvement of the interpretation of the Constitution, which allegedly touches to the independence of the Judiciary, we direct let all these cases be fixed at Islamabad on 23rd July, 2012. All concerned be informed accordingly.” – Dawn