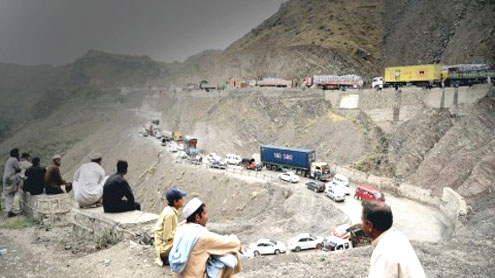 ISLAMABAD: As the United States and Pakistan inch closer to sign a vital agreement on the “formalisation of NATO supplies”, Islamabad has refused to accept the US demand for the long term use of these supply lines through its soil beyond 2014, a deadline set by Washington for the withdrawal of bulk of its troops from Afghanistan.

The Obama administration had been urging Pakistan for months to accede to its demand for the prolonged use of NATO routes so that Washington could meet the needs of its military bases in Afghanistan in terms of provision of goods, including food and oil, for coming months and years, a period that could stretch to decades.However, Islamabad expressed its inability to accept this US demand as it finally unblocked the NATO supplies a few days ago after keeping them closed for over seven months in the wake of NATO strikes on Pakistani border posts in November.

“However, despite the refusal by Islamabad regarding the acceptance of American demand for the long term use of NATO supplies, which are also called Ground Lines of Communications (GLOCs), the Obama administration is more than happy over the unblocking of supplies to Afghanistan, which will save it now from the millions of dollars’ in losses that it had to bear while using the alternative route through Russia and Central Asian states,” said a diplomatic source on Sunday, seeking anonymity. He said another important matter that the two sides had discussed for long was the matter of security of the NATO supply lines after their reopening. He added that the US was asking Pakistan to provide security to NATO supplies in both settled and Tribal Areas, but Islamabad had agreed to do that only in settled regions.

A Pakistani official refused to comment on Islamabad’s refusal to accept the US demand for the long term use of its soil for NATO supplies to Afghanistan. However, he confirmed that Pakistani security forces would provide the GLoCs with proper security in settled areas. He said both sides were close to signing an MoU on the formalization of NATO supplies once consensus was reached between Islamabad and Washington. He said under the MoU, the US would not use the NATO supply trucks for the provision of arms and ammunition to the international forces in Afghanistan. “Scanners would be installed at Pakistani ports for the detection of lethal supplies through GLoCs,” he said. He said as per the agreement, Pakistan would not charge any fee for NATO supplies, but the US had agreed to help Pakistan in carpeting the roads and highways which were in dilapidated conditions after being used for years by heavy NATO vehicles. – PT