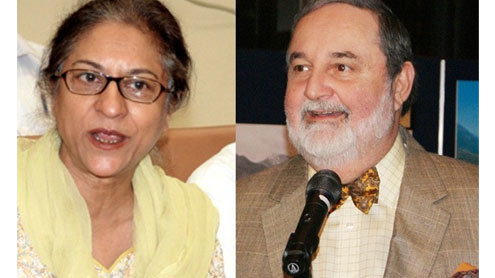 ISLAMABAD: Don’t be taken in by the negative sound-bites. On the face of it, political forces seem to be struggling to succeed in the litmus test of managing the first transition from one popularly elected dispensation to another in the country’s history, and are fighting it out bitterly over all things major and minor.

However, there is more to it than meets the eye.Amid feverish speculation on what will happen by the end of the month in the high-stakes confrontation between the government and the judiciary, which may see a second prime minister elected by parliament losing his job, the two largest political parties of the country are quietly but rapidly finalising an agreement.

Media has it from credible sources that the ruling Pakistan Peoples Party (PPP) and the Pakistan Muslim League-Nawaz (PML-N) are close to working out a political deal that would result both in naming a consensus caretaker prime minister and finalisation of a date for election to be held before the end of the year.

There are two candidates being discussed for the all-important post of caretaker prime minister, on which both sides have been holding discussions over the past 10 days. There is the soft, back-up option in Abdullah Hussain Haroon, currently Pakistan’s ambassador to the United Nations.  Then there is the second, more sensational candidate under serious consideration: none other than Asma Jahangir, the former president of the Supreme Court Bar Association and former chairperson of the Human Rights Commission of Pakistan.

While no one from either the PPP or the PML-N is willing to officially come on record with this, unofficially key sources in the hierarchy of both parties confirm that talks on caretaker prime ministerial candidates and a date for elections are in advanced stages.While refusing to either deny or confirm the names of Jahangir and Haroon as candidates, a member of the close circle of Sharif said, on the condition of anonymity advised patience for the short term. “Wait for two weeks and a lot will be clear, as well as some good news for all,” he said.

When approached, a source close to the presidency was equally assuring. “We have been talking [to PML-N] not for some days but for close to two months now and have whittled down some names that are generally agreeable to both [our parties],” he said. Again refusing to confirm or deny Jahangir and Haroon, the only additional information he offered was: “[The caretaker prime minister] will neither be from the PPP or PML-N, nor one who has been a member or leader of any other political party.”

The sources claim that Asma Jahangir is the current frontrunner not only because she is known for her vociferous stand for parliamentary supremacy and rule of law but, even more importantly, for her unambiguous stand against interference of the ‘establishment’ in the democratic process.

“In fact, the consensus [between PML-N and PPP] on Fakhruddin G Ebrahim [as the chief election commissioner] is closely linked to her (Asma Jahangir’s) candidacy under consideration by both parties,” a source in the PML-N said. “Both (Fakhruddin and Asma) have links to the legal fraternity, which respects them both, and which should come handy in dealing with any legal challenges that may be thrown by [Imran Khan’s] Pakistan Tehrik-e-Insaf during the tenure of the caretaker government to seek support of the judiciary in queering up the electoral pitch,” he added.

Sources in the PPP, while careful in not confirming or denying Jahangir’s candidacy, indirectly revealed why she would be a good choice for them. “We don’t want an interim prime minister who can be amenable to pressure from the [Supreme Court] judges to write a letter to the Swiss authorities during the caretaker period seeking investigations against the president,” he said. “We want a caretaker prime minister who has no agenda of their own and one who can work well with the chief election commissioner in focusing on the one-point agenda of holding a free, fair and impartial election,” he added.

Sources in both parties agreed that the litmus test of the maturity of political forces is at hand. “We may have our differences, and some really strong ones at that, but all we want are the freest, fairest and most credible elections in Pakistan’s history and these can only be if, for the first time in our history, we, the political forces, and not the establishment, decide and implement the rules of the game,” a source in the PPP said. “We’ve made a solid start with the joint nomination of the CEC. However, pressure [from the establishment] is mounting and we can’t waste much time now. The elections will be held before the end of the year for which we need caretakers who can restore faith in democracy and politics and be the best advertisement for an election with a high turnout,” he added.

Sources also confirmed that Jahangir recently met Sharif and a close aide of the president while Haroon is scheduled to meet both Sharif and President Zardari over the next few days. Both are likely to be agreed upon as joint candidates with Jahangir as the first choice and Haroon as the covering candidate.

Sources also said that PPP allies have already agreed to leave it to President Zardari to make the decision on the nomination of a caretaker prime minister on behalf of the coalition. They also said that neither the PPP nor the PML-N want to drag out the nomination like in the case of the CEC and both the Leader of the House Raja Pervaiz Ashraf and the Leader of the Opposition Chaudhry Nisar Ali would be meeting to put the official seal on “the political deal of the new millennium” in Pakistan “in two to three weeks’ time”.

“It’s going to be a win-win for all: the ruling parties, the opposition parties – both inside and outside parliament, and most of all for the people of Pakistan. The only loser will be the establishment, which usually steals the elections somewhere starting with the nomination of the caretaker prime minister and a malleable Election Commission. Not this time round,” added the source. – Tribune