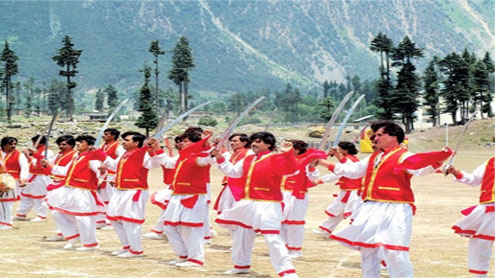 SWAT: Amid fireworks and cheers, the five-day Swat Summer Festival concluded in Kalam on Monday.

“The success of the festival is proven by the huge number of tourists it attracted from across the country,” said Gen Rabbani, adding that it also a reminder that peace has been restored in Swat valley. “I invite tourists from the entire world to visit Swat without any hesitation and enjoy the spectacular and serene environment of the valley,” he said. He promised that another festival on the same pattern will also be organised next year.

Though the festival had officially ended, thousands of people could still be seen thronging the various tourist resorts in Swat.“The cool breeze on our cheeks and the spectacular sceneries you only see in pictures, everything is perfect here,” said Ayesha Anam, an eighth-grader from Karachi, as she sat on a charpoi along Swat River.With the staggering influx of tourists, local hoteliers and salespersons are having a field day. Seven-year-old Javed, who sells boiled eggs after school hours, said he has been earning around Rs200 to 300 every day since the festival started. “I hope the people keep coming,” he said. – Thetribune