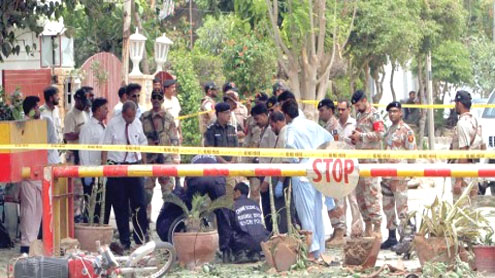 Bomb Blast outside the Chinese Consulate

KARACHI: At least three people were injured in a high-intensity bomb blast outside the Chinese Consulate in old Clifton area of Karachi on Monday, officials said.

Police said a bomb was fitted to a motorcycle that damaged several vehicles and motorcycles outside the consulate as it went off. Police, Rangers and Rescue teams rushed to the area and cordoned off the blast site.Area superintendent of police said a Rangers official was among the three people injured in the blast. The blast took place in a high security zone are where a couple of consulates are located.

The SP said the blast took place at the backside of the consulate and an inquiry had been ordered into the incident. Meanwhile, the banned group Lashkar-e-Balochistan has claimed responsibility for the attack on the Chinese Consulate. Talking to private media outlet through satellite telephone from an unidentified location, a spokesperson for the group said the attack was a warning message for China to immediately evacuate Balochistan and stop fleecing the resources of Balochistan with the support of Pakistan.

He said China and other international powers were signing agreements with Pakistan to plunder the resources of Balochistan, which were against the will of Baloch people and they would not accept any such agreement and would continue resistance in future.Cautioning foreigners busy in exploring resources in Balochistan, the Lashkar-e-Balochistan spokesman said they would attack installations setup by international powers, including China, in Balochistan. During a search operation in the surrounding area later, authorities and rescue teams recovered another suspected motorcycle close to the consulate that had also been fitted with a bomb. Officials said another potential tragedy had been avoided by recovering the bomb in time. – PT

Punjab IG’s competence on the line