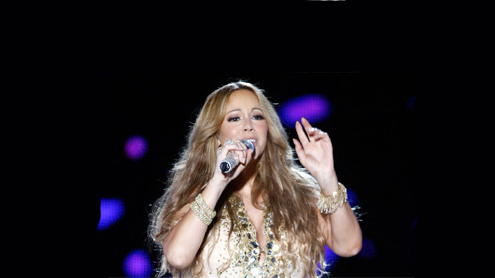 Mariah Carey will join “American Idol” as a judge next season, Fox announced Monday, bringing her star power to the show that remains a ratings leader but has seen its viewership and pop culture status diminish.

“I am so excited to be joining ‘Idol,’” said Carey, addressing the Television Critics Association via Fox entertainment chief Kevin Reilly’s cellphone, which he put on speakerphone for the hotel ballroom meeting.  She couldn’t be on hand with the group because “this kind of all just happened really quickly,” Carey said in her brief remarks. “I can’t wait to get started in the fall … and I will see you in January.”  The show, which saw judges Steven Tyler and Jennifer Lopez exit at the end of last season, will be back on the air for season 12 in January.

Reilly called Carey “the biggest recording artist that any of these (talent) shows has ever had,” adding that she was the “artist that many of these contestants have tried to emulate, have tried some of the songs, have tried to hit the notes.”  Playing the drama up, Reilly placed a call to Carey and put her on speaker.  “Hi, Mariah. How are you? It’s Kevin,” he said. “We do have a deal, don’t we? Yes!”  Reilly said he was “thrilled” to confirm reports that Carey was being courted by Fox and said the deal was freshly signed within the last few hours.

The Grammy-winning pop star is receiving just shy of $18 million a year for a one-year contract with a renewal option, according to a person familiar with the negotiations. The person, lacking authority to discuss the matter publicly, spoke on condition of anonymity.  The exit of Tyler and Lopez left original judge Randy Jackson and started a guessing game about potential replacements, with Carey at the top of the list. As one of music’s best-selling singers, she could provide the clout “American Idol” needs to compete in an increasingly crowded talent show field.

Besides Fox sibling “The X Factor,” which recently added Britney Spears and Demi Lovato as judges, there’s NBC’s “The Voice,” which boasts Christina Aguilera among its big names.  “Not being the only game in town now, we need to keep things fresh,” Reilly said. The search is on for a third judge, and he promised another impressive pick. It could be a star or someone like music executive and “Idol” mentor Jimmy Iovine, who wasn’t a household name when he joined, Reilly said. But, he added, after 12 seasons “we need to have something to talk about.”

“We have the biggest names in the business, like Mariah Carey, interested in doing this … so for the next couple of weeks it will be a matter of picking the right one, with the right chemistry, making the deal, and finalizing this,” he said.  Jackson’s value to the show was enhanced by Carey’s signing, although Fox has yet to say whether he’ll judge next season. Ryan Seacrest will be back as host.  “I can’t confirm and don’t want to talk about anyone” else on the show, Reilly said. But he added that Jackson “has been working with Mariah and is in fact her co-manager, and Randy was very instrumental in doing this deal.”

Simon Cowell, the former “American Idol” judge who adapted his U.K. hit “X Factor” for Fox, was asked about Carey’s new gig at a critics’ session later Monday.  “I’m happy for her, actually. I like Mariah. I think she’s going to find it difficult to say no. You’ve got to say no to people and she’s sweet,” he said, then quickly backtracked, adding, “No, I think she’ll be great.”  Cowell had reason to be diplomatic: Carey’s husband, Nick Cannon, is host of Cowell’s “America’s Got Talent” on NBC.  “American Idol” ended the 2011-12 season as the leading entertainment show and No. 2 overall, just behind NBC’s top-rated “Sunday Night Football.”

But the show aired its least-watched finale ever this season and the advertiser-favored young adult audience has been steadily shrinking. The show’s cachet hasn’t been helped by a run of champions who have failed to achieve the career sizzle of past competitors Jennifer Hudson, Carrie Underwood or Kelly Clarkson.  Earlier Monday, veteran “Idol” executive producer Nigel Lythgoe said there’s a slender possibility that Lopez might return. His reasoning: Since she told Seacrest she was 99 percent sure she was leaving, that means there’s a 1 percent chance she won’t, Lythgoe said.

He said he hoped that was the case, although Lythgoe also told the critics’ annual summer meeting that he thought the show should be freshened each season with new judges.  But Lopez’s representative confirmed again Monday that she’s leaving “American Idol.” She originally made the announcement July 13, a day after Tyler said he was leaving.  Reilly also disputed Lythgoe’s comment, saying, “it’s 100 percent that Jennifer won’t be back to the show.”

“We came to a mutual decision with Jennifer and Steven,” he said, calling it a “great experience with both of them. Creatively, we were all happy.”  But it was decided “it was the time for a change,” Reilly said. Lythgoe said his own contract is under negotiation, declining to comment further. Reilly later called Lythgoe “the best producer in the business.” -Khaleejtimes

No compromise: Lashkari Raisani rules out possibility of rejoining PPP

No compromise: Lashkari Raisani rules out possibility of rejoining PPP