Free, fair, transparent polls will be ensured at all cost: CEC 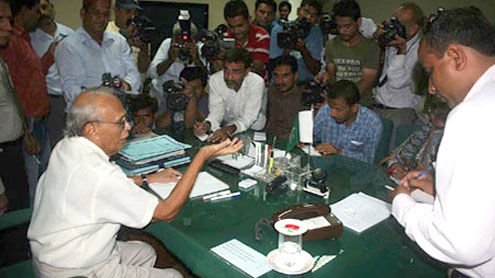 KARACHI: Chief Election Commissioner (CEC) Justice (r) Fakhruddin G Ebrahim on Thursday reaffirmed that free, fair and transparent general elections in the country will be ensured at all cost.

Talking to newsmen during his visit to Provincial Election Commission, Sindh, he said the whole nation wanted free elections and the Election Commission was working on strategy to fulfill the desire. “The holding of free and fair elections would be a big challenge and all out efforts will be made in order to come up to expectations of the nation. I want to hold such elections to which no one can raise objection.

Free and fair polls will change the fate of the country,” he observed. Justice (r) Ebrahim asked the officials of the Election Commission to shun their relations with politicians to ensure free polls. He said that the new electoral rolls would be issued by July 31. Earlier, the CEC was briefed by the provincial election commissioner on preparations for the forthcoming general elections. – Dailytimes