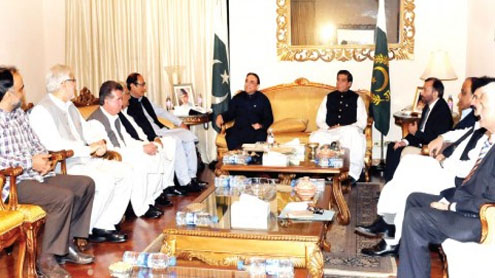 No compromise on right to legislate

ISLAMABAD: Striking a defiant note in wake of the Supreme Court’s verdict declaring the new Contempt of Court law null and void, the Pakistan People’s Party and its coalition partners on Friday night decided that the government would uphold at all costs the parliament’s right to legislate.

A meeting of heads of the allied parties chaired by President Asif Zardari and Prime Minister Raja Pervaiz Ashraf at the Presidency reiterated that under the constitution, the power to legislate belongs only to the elected representatives and they would not compromise on this right. Senator Farhatullah Babar, the spokesman of President Asif Zardari, said in a statement that the meeting agreed that in the present situation there was even greater need to remain united and firm. The coalition partners resolved to remain united and firm and face the emerging challenges with unity, force and conviction, he said.

The meeting was attended among others by Senator Chaudhry Shujaat Hussain, Senator Haji Muhammad Adeel, Senator Afrasiab Khattak, Dr Farooq Sattar, Senator Babar Khan Ghouri, Senator Abbas Khan Afridi, Munir Khan Orakzai and Hameedullah Jan Afridi. Babar said that Prime Minister Ashraf briefed the meeting participants on the current power situation in the country. The PM said that the energy situation was steadily improving and expressed the hope that the crisis will soon be overcome. The spokesperson said that President Zardari directed that the cabinet decision about zero duty on the import of solar panels should be implemented without delay to encourage the growth of solar power and reduce pressure on power sector.

The meeting also decided that special measures would be taken to address the issues of traders and businessmen in Karachi and curb the menace of extortion with an iron hand regardless of the political affiliations of the suspects. Earlier in the day, Chief Justice of Pakistan Iftikhar Mohammad Chaudhry remarked while hearing petitions challenging the newly passed Contempt of Court that the immunity provided by the new law was contrary to the fundamentals of the constitution and Sections 6 and 8 of the new law were unconstitutional and were against the freedom of judiciary.

Section 11, which says that a hearing will be suspended when an appeal is filed, was also declared against the freedom of the judiciary, with the chief justice stating that the new law was contradictory to Articles 4 and 9 of the Constitution. The five-member bench maintained that no government official could be given any immunity, and ordered that the 2003 Contempt of Court Ordinance will now come into effect