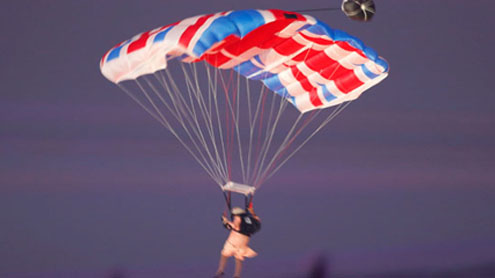 Princes William and Harry said they were kept completely in the dark about their grandmother Queen Elizabeth II’s role as a James Bond girl in the London Olympics opening ceremony.

William, the second in line to the British throne, and his younger brother joked that the 86-year-old monarch has now been asked to star in the next 007 film alongside the fictional secret agent.During the opening ceremony the queen had an unprecedented speaking role in a pre-recorded segment with actor Daniel Craig, before they both appeared to jump out of a helicopter and land in the Olympic stadium.“To be honest, we were kept completely in the dark about it — that’s how big the secret was,” William, 30, told BBC television.

“Harry got a sniff of a rumour on the night — and we were talking about it and thought it probably wouldn’t happen. The rumour mill was going into overdrive.”William — who is no stranger to helicopters himself as a Royal Air Force search and rescue pilot — joked: “But in fact she’s put in such a good performance that she’s now been asked to star in the next Bond film — so I’m thrilled for her!”

Harry, 27, added: “Both of us were slightly surprised by our grandmother’s secret hobby of parachuting which I think went down unbelievably well.”“You don’t expect the queen to do something like that,” Harry said. “What she does in her spare time is her spare time.”The parachuting part of the segment was in fact performed by stuntmen.William, his wife Kate and Harry have cheered on British athletes at several events during the Olympics — including their cousin Zara Philips, who won an eventing silver on Tuesday. – Khaleejnews