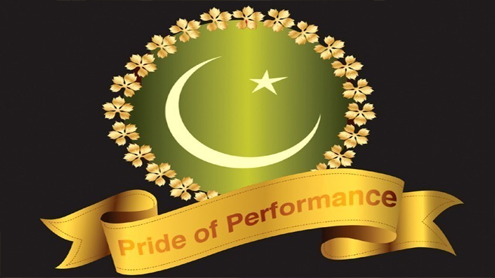 ISLAMABAD: Fifty-seven years after his death, controversial writer Saadat Hassan Manto was recognised posthumously through the conferment of a top state honour.

He was one of the 192 recipients of top civilian awards, announced on Monday by the president. Manto’s is one of the 11 awards conferred posthumously.  The list of such recipients includes the name of Fauzia Wahab, former secretary information of Pakistan Peoples Party (PPP), who passed away earlier this year. The awards will be distributed, as is custom, on March 23, 2013. Among those who are going to be presented with the accolades are eight foreigners from China, United Kingdom, France, Spain and Malaysia. Abdul Sattar Edhi and Dr Ishratul Ebad Khan (governor of Sindh) have been awarded Nishan-i-Imtiaz for Public service whereas Mehdi Hassan has been given the posthumous award in the field of Art (Music) and Literature.

Some well-known recipients of Hilal-i-Imtiaz include Ansar Burney for Social Service, Zia Mohyeddin for Art (Acting/Comparing), Abida Parveen (Singer), Anwar Maqsood (Literature), Fatima Suriya Bajia (Literature), Hafeez Kardar and Fazal Mehmood (posthumous) for Sports (Cricket) and Khalid Abbas Dar (Drama acting/comparing). Maulana Muhammad Mirajuddin Shaheed from South Wazirstan Agency, a former member of parliament who played a key role as a negotiator when Baitullah Mehsud kidnapped a convoy of more than 100 troops travelling from Tank to South Waziristan in 2007, has been awarded with the Tamgha-I-Shuja’at.