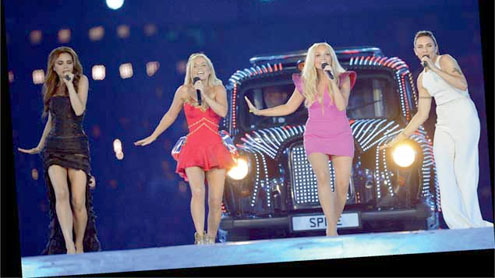 Like the Olympic torch passing from one runner to another, the closing ceremony of the London Olympics 2012 was a vibrant and all-ages affair designed to show the flame of British creativity leaping from one age group to the next.

A ceremony that director Kim Gavin called an “elegant mashup” of music and creativity was designed to show that the British Invasion never ended, thank you very much. The show rocked the 80,000 spectators inside Olympic Stadium, but didn’t get rave reviews from those watching on TV. Some found it too kitschy, or too incomprehensible — youngsters wondering who Ray Davies was, parents scratching their heads at One Direction. AP
Queen (not that one)

In Olympic Stadium on Sunday night, he was represented on big screens showing a video of his 1986 performance. His Queen bandmate Brian May has almost assumed the role of conductor at big British events in recent years. He played for the actual Queen on the roof of Buckingham palace and now he is playing the Olympic Stadium.

Every member of the audience is clapping. May is conducting.

Britain to the world: “We Will Rock You.”

His face serious but his voice powerful, Gary Barlow took the stage at the very end of the London Olympics closing ceremony, singing Rule the World alongside his Take That bandmates with strength and poise just days after a tragedy in his own life.

Speculation had been rife that Barlow would bow out of the performance after he and his wife Dawn said on August 6 that their daughter had been stillborn.

At the time, the couple said they were devastated by the loss of Poppy Barlow and said their focus was “on giving her a beautiful funeral and loving our three children with all our hearts.” Barlow and his wife have a son and two daughters. Barlow, also a judge of the TV talent show The X Factor, was organizer of June’s huge Buckingham Palace concert celebrating Queen Elizabeth II’s Diamond Jubilee.

‘The Bourne Legacy’ – interesting, but not exciting enough