No timeframe: Kayani hints at blitz in North Waziristan 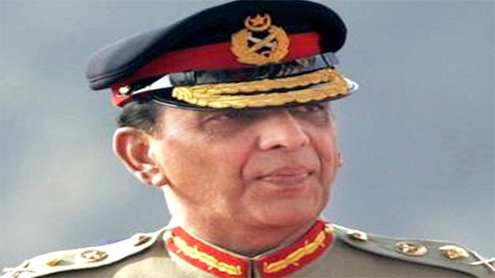 ISLAMABAD: Army chief General Ashfaq Parvez Kayani indicated on Friday that Pakistan might launch a fresh military offensive in the restive North Waziristan Agency (NWA), but stressed that it would not be initiated at the behest of any outside power.

“We might, if necessary, undertake operations in NWA, in the timeframe of our choosing and determined only by our political and military requirements. It will never be a result of any outside pressure,” the army chief was quoted as saying by the Inter-Services Public Relations (ISPR), following talks with the head of US Central Command (Centcom) General James Mattis. Gen Mattis arrived in Islamabad late Thursday evening, where senior officials said he would meet the army chief to discuss how to eliminate their “common enemy” – Tehreek-e-Taliban Pakistan (TTP) chief Hakimullah Mehsud.

Sources said the military was planning for a push against the TTP in North Waziristan but did not want to be seen as aligned with the US because of the likely public backlash. According to the ISPR statement, the army chief said Pakistan’s national interest continues to be the prime consideration for any decision regarding the military offensive in North Waziristan. Gen Kayani, during a meeting with Gen Mattis, also denied reports that he had given any ‘understanding’ to General John Allen, the head of the Nato/Isaf mission in Afghanistan, about Pakistan’s willingness to launch joint operations in the restive tribal areas.

He clarified Pakistan’s position by referring to US Secretary of State Hillary Clinton’s statement on July 3, 2012, in which she talked of “coordinated action against terrorists who threaten Pakistan and the region.” The statement went to great lengths to stress that it was “important” to distinguish between ‘coordinated action’ and a ‘joint operation’: “Coordinated action implies that the Pakistan Army and Isaf conduct an operation on their respective sides of the Pak-Afghan Border, for which intelligence sharing is the mainstay of mutual cooperation. Contrarily, a ‘joint operation’ implies that the two forces are physically employed jointly on either side of the border.

“A joint operation in this sense is unacceptable to the people and Armed Forces of Pakistan, hence, has always been our clearly stated red line,” the statement read. It further said the two generals expressed satisfaction over the level of cooperation between their militaries and resolved to continue to further improve relations between the two countries. The US Embassy also released a statement on Friday, terming Mattis’ talks with senior Pakistani leaders successful. According to the statement, General Mattis held meetings with Gen Kayani, Secretary of Defense Lt Gen (retd) Asif Yasin Malik and other senior military officials on a “wide range of common security issues, (including) militant network activities and measures to improve cross-border cooperation.

“They agreed to continue to meet periodically to further common objectives on cross-border cooperation and regional security,” the statement added. An American diplomat said that Gen Mattis highlighted the importance of Pakistan going after the ‘deadliest’ Afghan insurgents, the Haqqani network, to ensure peace and stability in Afghanistan. He also acknowledged the sacrifices made by the Pakistan military in their fight against militants, and offered his condolences for the nearly 5,000 Pakistani military personnel who have fallen in support of that cause. -Tribune