by top3
in Khyber Pakhtunkhwa, Pakistan
0 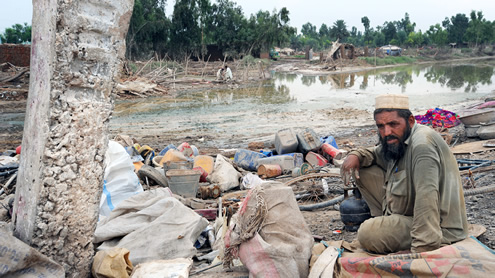 Also in the day, officials issued warning of more rains over the next 48 hours in different parts of the region. An official of the Provincial Disaster Management Authority (PDMA) said three deaths were reported in Pir Piyai and Azakhel areas of Nowshera and six in different parts of Mansehra. He said hilly areas in the surroundings of Nowshera town received widespread rains, which triggered flashfloods. The Met Office said Cherat area in southern Nowshera town received 29 millimetres rain, which flooded watercourses in catchments. According to it, Azakhel Payan, Azakhel Bala, Pir Pay and Nowshera Kalan were the areas worst hit by the calamity as 12 houses and shops were damaged or destroyed by it there.

Floodwater entered a dairy farm in Pir Piyai area and washed away 75 to 80 cows and buffalos. Floods also damaged crops in the area. Turk Ali Shah, a resident of Khat Kalay area, said rains played havoc with people’s property, household items and animals. According to him, three people, including an Afghan national, drowned in a local nullah. Divers later pulled the bodies out of water. The deceased were Mazar Shah and his cousin Noorul Ameen. However, the Afghan national’s name couldn’t be ascertained. Doctors at Pabbi Hospital said 13 injured people, including three women, had been shifted to the facility, while the condition of the three was critical.

Officials said heavy rains also damaged power transmission lines in Jalozai and Pabbi areas disrupting electric supply. According to them, two people were killed in the area, while roads and other infrastructure were destroyed by torrential rains and flashfloods in Barang and others areas of Bajaur Agency. It began raining heavily early in the morning and continued until evening. Local officials said two people, including a woman, were taken away by flashfloods and that their bodies were later found. They said several houses collapsed, while damage was done to many. Rain lashed parts of Swabi district and inundated low-lying areas in Topi tehsil. Tarbela-Topi Road remained closed to traffic for hours. Heavy rain began after midnight and continued for hours, leading to flooded streets.

Drains and watercourses overflowed, while rainwater entered several houses. Electric supply, too, remained suspended for hours. In cantonment area of Abbottabad, 12 houses were damaged due to flooded watercourses. Residents protested against the cantonment board authorities for not taking precautionary measures against rains and flooding. They blocked Karakoram Highway for more than an hour and said monsoon rains caused heavy damages to their properties but no relief had been provided to them yet. Heavy rainfall has also been reported in remote areas of Buner district. The rainwater washed away Riyal Bridge and part of nearby roads, and damaged Alami Banda Road.

Gari Habib Ullah-Balakot Road was blocked after heavy rains triggered a landslide in Mansehra district where floods killed six people, according to a PDMA official. The provincial capital also received heavy rainfall but reported no damage to public life or property. The rains provided the sought-after respite from scorching heat to the people. The Met Office said eight millimeters of rain was recorded in the city, while the maximum temperature there was 32 degree centigrade. According to it, Saidu Sharif in Swat received 21 millimeters rain, followed by Risalpur 17 millimeters, Malam Jaba (Swat) 9.5 millimeters and Balakot four millimeters.

PDMA said despite heavy rains in upper parts of the province, all rivers and nullahs were flowing normal. According to the Flood Warning Cell in Peshawar, a ‘well-marked rain bearing weather system’ is likely to produce moderate to heavy rains at places like Kohat, Bannu, Peshawar, Mardan and Hazara divisions during the next 48 hours resulting in flashfloods of medium to high intensity in Kabul, Kurram, Gambela and Swat rivers and their tributaries.-Dawn