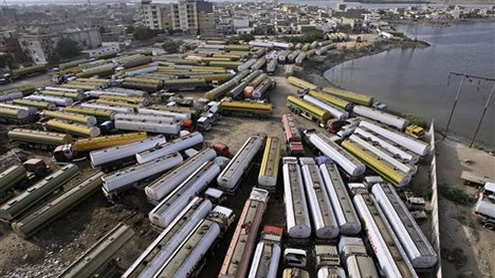 LAHORE: The reopening of two key NATO supply routes last month not only eased the diplomatic tension between Pakistan and the United States, but benefited a third party as well, Pakistan’s black-market businesses.

Pakistan’s active black markets, which stretch from Karachi to Peshawar, and from Quetta to the northern tribal belt, used to be flooded with US-made goods, from flak jackets to M-4 rifles, soda, and cigarettes. Then, a few months ago, the underground economy, which largely depends on the NATO supply trucks for supplies, dried up. The thousands of Pakistanis who depended on it for income and cheap supplies were hit hard. “Our business had really gone down [due to closure of NATO supply routes]. But, thank God, things have been settled down, and we are going to reactivate our business,” an arms dealer from Quetta told the Christian Science Monitor.

The arms dealer, who goes by the name “Kaka” (which means “older brother” in Pashtu), says he has seen the prices of US-made weapons and other military equipment shoot up because they’ve become so difficult to get. “Not only the M-4 rifle, but prices of other military equipment like communication devices, small pistols, night vision goggles, binoculars, caps, and flak jackets have also gone up,” says Kaka whose clientele includes both Taliban and anti-Taliban buyers – both of which prefer US-made equipment. With fewer goods to sell and higher prices for the equipment he does have in stock, there have been fewer buyers, and Kaka says it has been difficult to make both ends meet in the past few months.

However, prices – and thus business – are likely to normalise now that the two sides have inked an agreement to reopen routes, which are used to transport 70 percent of non-lethal NATO supplies into Afghanistan. “Good days are back,” says a smiling Kaka, who wears a traditional Pashtun turban, his hair in long strands. Figures about the actual size of Pakistan’s black market or underground economy vary, but the Federal Board of Revenue said this week that it had grown to more than half the size of the formal economy, according to a researcher. Karachi-based economist Shahid Hassan Siddiqui says that more than 50 percent of Pakistan’s total economy depends on the black market.

“Pakistan is one of a very few countries where government actually facilitates black economy through laws, which has brought the country’s tax-to-GDP ratio lowest in the world,” says Dr Siddiqui. According to intelligence sources, almost 70 percent to 75 percent of US-made weapons in Pakistan make their way into the black market through Afghan smugglers who buy these weapons from Afghan soldiers and policemen. The remaining 25 percent of illegal items are sold by different local terrorist groups who also use the NATO supply routes to transport them. Coordinated attacks on NATO convoys within Pakistan by terrorists feed the black markets.

Security analysts believe that in many cases terrorists and crew members of NATO containers have a close nexus. “Militants, in many cases, get away with military-related equipment before burning the containers, and leave non-military related commodities, like food stuff, soft drinks, mineral-water bottles, office equipment, spare parts of vehicles, boots, jackets, cigarettes, etc for the crew members, who later sell them in the black market,” says Ikram Sehgal, a Karachi-based security analyst. The National Accountability Bureau, on the directives of the Supreme Court, recently initiated a probe to investigate how during the past five years hundreds of NATO containers, which began their journey from Karachi Port, never reached their destination.

And even supplies that do make it to their destination in Afghanistan are not immune. Sehgal says a good number of weapons are stolen from Afghan army depots, where the Afghan National Army looks the other way. These are then shipped to Pakistan where they can be sold and purchased easily. Darra Adamkhel, commonly known as “Pakistan’s arms bazaar” and located 20 miles south of Peshawar, attracts lovers of US-made weapons, where not only the original weapons, but their replicas prepared in local nonconventional arms factories, are available.

Walking in the dust-bowed streets of Sohrab Goth, a shanty town located in Karachi’s northern suburb, and dominated by Pashtuns and Afghan refugees, each soft drink can is sold for 15 cents. In a legal market, the soft drink can’t be found for less than 50 cents. Everything from American shoes to cigarettes to water are easily available at the famous Light House market of Karachi, despite the fact that most of the shop owners there do not have the proper import licences required to prove that such foreign goods sold here are legal. “You don’t have to place an order to a US company,” Sehgal says. “Everything is available here.”-Dailynews