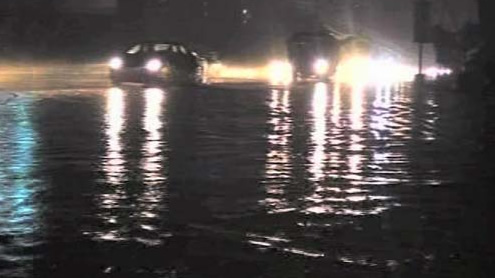 Heavy rains in Sialkot and Narowal, which started on Tuesday night, caused flood in Nullah Dek.

The flood water inundated 50 villages and submerged standing crop on hundreds of acres of land. Irrigation officials in Sialkot informed that 5,000 cusecs of water is passing through Nullah Deck. Traffic on Narowal-Pasroor Road was suspended. The low-lying areas of Narowal also submerged under flood water.

Heavy rain in Wazirabad, which lasted for almost eight hours, caused flood in Nullah Palkhu. Standing crops were submerged under flood water while resident of nearby localities are moving to safer places. According to irrigation officials, 736 cusecs of water is passing through Nullah Palkhu and it is feared that the water level will rise.

Meanwhile three people were killed in Kotli Satyan near Rawalpindi when a wall collapsed due to heavy rain. The rain has also damaged several houses in the area. -dunyanews