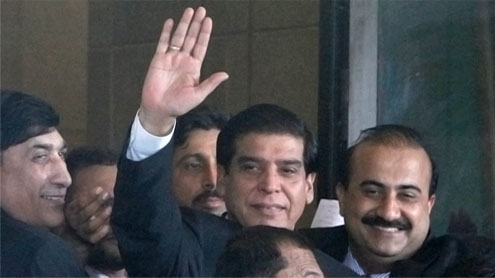 ISLAMABAD: Prime Minister Raja Pervez Ashraf,  who was issued a show-cause notice for contempt of court for refusing to write to Swiss authorities to reopen graft cases against President Asif Ali Zardari, appeared before the Supreme Court on Monday.

A five-judge bench headed by Justice Asif Saeed Khosa, which had issued the show-cause notice to the prime minister on Aug 8 for not implementing its order, heard the case.

10: 37: The prime minister departed from the court’s premises after the completion of today’s hearing.

10: 30: The bench adjourned the hearing of the NRO implementation case to Sept 18.

10: 08: The bench then gave the premier until Sept 18 to write the letter to Swiss authorities.

10: 07: The premier said he would be in China at the time and requested the court to give a date after the 12th.

10: 06 After the completion of the premier’s statement, the bench on the judges held a consultation after which the court gave him time until Sept 12 to write the letter.

10: 04: Prime Minister Ashraf said that he valued the court’s advice.

10: 03: Justice Khosa said it had been decided that regardless of position, everyone would have to obey the laws of the state, adding that, the bench did not want the premier to appear before it again and again. He moreover said that instead of consultations, the prime minister should resolve the matter at the earliest.

10:02: Justice Khosa asked if the government was employing delaying tactics, upon which the prime minister said that he had only been the premier for two months and that he should be given some time.

10: 01: Prime Minister Ashraf assured the court that the matter would be resolved.

10: 00:  Justice Khosa said the court did not want confrontation but only wanted the implementation of laws.

09: 59: Justice Khosa said the court was willing to grant more time once it is guaranteed that the directive would be implemented.

09: 58: Justice Khosa said only appearing in the court did not imply respect for the judiciary, adding that, the prime minister should guarantee that the court’s directive would be implemented.

09: 57: Justice Athar Saeed said that members of the cabinet had been giving statements that were tantamount to contempt of court.

09:56: Justice Athar Saeed moreover said that it appeared that the prime minister had no control over his cabinet.

09: 55: Justice Athar Saeed told the premier that in spite of holding several sessions and meetings on the matter, he had not been able to resolve them.

09: 54: Addressing the prime minister, Justice Ejaz Afzal said that the matter should be resolved at the earliest.

09: 48: Justice Asif Saeed Khosa said the issue was not as complex as the government was making it seem.

09: 45: Prime Minister Ashraf requested the court to give him four to six weeks’ time to write the letter to Swiss authorities.

“I need time to understand the matter…as it involves certain legal and Constitutional points,” the premier told the court.

“I need enough time from the court to seek the assistance of constitutional and legal experts,” he said.

09: 42: Prime Minister Ashraf said that the government had to ensure that the court’s respect was maintained.

09:15: Qamar Zaman Kaira said writing the letter to Swiss authorities was in violation of the Constitution, adding that, the PPP was ready to offer more sacrifices for democracy.

09:11: Earlier, Prime Minister Ashraf told media representatives that he was appearing before the court out of his respect for the judiciary.

09:03: ANP leader Haji Adeel was also present in the court.

08: 58: “A middle path should be adopted this time,” Kaira told reporters outside the Supreme Court.

08: 57: Qamar Zaman Kaira said: We have appeared before the courts earlier also and have respected the decisions in spite of having reservations.

08:55: Speaking to media representatives outside the Supreme Court, Information Minister Qamar Zaman Kaira said that the PPP had always respected the institution of the judiciary.

08: 50: The prime minister’s security staff arrived at the court.

08: 44: Presidential spokesman Farhatullah Babar and PPP leader and defence minister Naveed Qamar arrived at the court for the hearing.

Strict security arrangements were made around the apex court in the wake of the hearing of the high profile case. No unauthorised persons were allowed in the red-zone as police has cordoned off the area surrounding the apex court.

PPP and coalition parties’ stance on the issue

The ruling coalition on Sunday night decided that the prime minister would appear before the Supreme Court. The coalition, however, remained adamant not to write the letter to Swiss authorities for reopening the cases against President Zardari.The announcement was made in a handout issued by presidential spokesman Farhatullah Khan Babar after a 90-minute meeting of coalition partners at the Presidency.

“After an in-depth discussion on points raised by the law minister and weighing available options, the meeting decided that in line with the coalition government’s policy of showing respect to the majesty of law the prime minister would appear before the Supreme Court on Monday,” Babar said.The spokesman said the coalition partners had resolved to remain united in coping with the challenges confronting the government and the prime minister.

The PPP members were of the view that since there had been no change in the party’s stance on the issue of writing the letter there would be no use of putting the prime minister in the dock.President Zardari is alleged to have amassed $60 million in Swiss banks. – Dawn