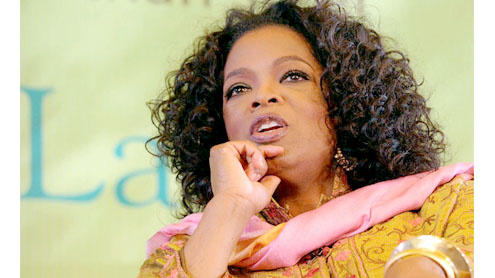 Oprah Winfrey’s talk show may have called it quits last year, but her earning and pulling power certainly hasn’t. For the fourth year in a row, the talk show host is at the top of Forbes’ Highest-Paid Celebrities list.

On May 25, 2011, she hosted the last episode of her syndicated talk show from Chicago. Now that the show has ended, she has some close competition on her heels, beating the second highest-paid celebrity by only $5 million, and earning $125 million less than a year ago. “Although the show ended it was still in reruns, so she still got some money from it,” Forbes’ Los Angeles bureau chief, Dorothy Pomerantz said. Most of her money is now coming from the rest of her empire, which includes shows by Dr Phil, Dr Oz, and Rachel Ray, and a lucrative radio deal.

Her network has laid off employees as she leads with shows like Oprah’s Lifeclass and Oprah’s Next Chapter. “She’ll still continue to make a lot of money, but without the syndicated show, she’ll take a big hit,” Pomerantz said. Michael Bay’s third Transformers film, Transformers: Dark of the Moon may have been lambasted by critics, but it still earned about 1.1 billion dollars at the box office. Pomerantz called Bay a “smart director” who made a “fantastic” deal with the film by getting a share of the profits, including a share of the toy sales.

The Bumblebee character in movie, for example, was created for the film. “Some of the money from every Bumblebee sale is going into Michael Bay’s pocket,” she said. With two Oscar-nominated films in theaters last year, War Horse and The Adventures of Tintin, director Steven Spielberg has proven time and time again he still has an eye for critically-acclaimed movie hits. Forbes said that Spielberg is likely going to return to their list next year with two other films, ‘Lincoln’ starring Daniel Day-Lewis, and ‘Robopocolypse,’ a sci-fi thriller based on the book by Daniel Wilson.

“Spielberg is a ‘perennial’ toward the top of our list,” Pomerantz said. The director, who receives tens of millions of dollars each year from residuals from his past hit films, also served as a consultant for the Universal Theme Parks, so gets a share of ticket sales. Jerry Bruckheimer made waves last year with the Pirates of the Caribbean. – PT