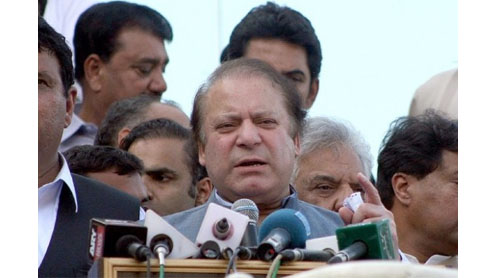 LAHORE: Enlisting the developmental projects undertaken by the Pakistan Muslim League – Nawaz (PML-N) during its past tenures, PML-N chief Nawaz Sharif said their growth reforms were copied by India as they proved to be very successful.

Speaking in Lahore on Tuesday, Sharif said India continued with the developmental work and hence prospered, whereas Pakistan did not as the PML-N government was dissolved.“Pakistan was better than India in every sense back then, our currency was stronger, we had more electric power, our economic growth rate was close to 8% while India’s was around 2% to 3%,” Nawaz stated.“India would look up to Pakistan as our country was fast developing,” he added.

Explaining their current struggle in Pakistan, Sharif said his party is “not struggling for power but for values; for the future of Pakistan.”“We only want power that can help us make Pakistan a better place,” he said.Pointing out the problems in Balochistan, the PML-N chief said that the crisis would have not cropped up if PML-N was allowed to complete its tenures.“We had planned to build motorways, schools and hospitals in the province just like other provinces,” he claimed.

Boasting about the nuclear tests done during his stint in power, Sharif said the step brought Pakistan on par with India, which had become a nuclear nation earlier.“This made Indian leader Vajpayee come all the way to Pakistan to talk about solving issues through dialogues,” he said.Mocking Pakistan Tehreek-i-Insaf (PTI) chairman Imran Khan for his claims of change in a matter of few days, Sharif said these problems cannot be solved in days, it takes years to bring about a change. – Tribune

Pak-Afghan Relations: Will They Ever Be Peaceful