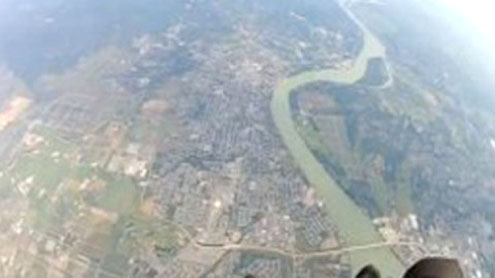 Lucas Damm had a reason to yell out his last name when the camera on his sky-diving helmet fell out just as he jumped from a plane.

When he landed in British Columbia, he got to do the same thing, but with a more positive inflection, because the camera survived a 12,500-foot fall without a scratch. The skydiver recently did a jump near Pitt Meadows, hoping to capture it on his GoPro, a type of camera designed to fit on the helmet.

But on the way out of the plane, his helmet hit the door and the camera popped out and started heading towards the ground even faster than Damm. He had no idea what happened until he landed. “I go to turn it off and I didn’t hear it beeping, and I know the [spot where the camera is held] is open and I just start freaking out,” he told Right This Minute.

A fellow skydiver found the camera on a grass field near the targeted landing site without any damage, to his amazement. “It’s just one of those random things,” he said. “It’s like winning the lottery of lotteries. For everything to come together the way that it happened is mind-boggling.” Damm posted the complete 8-minute video on YouTube. – PT