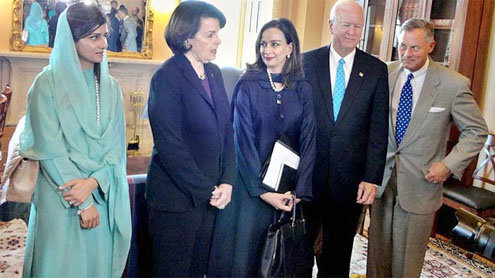 WASHINGTON: Foreign Minister Hina Rabbani Khar told US lawmakers on Wednesday that Pakistan was committed to working with a trilateral mechanism for promoting the Afghan reconciliation process.

In a meeting with members of the US Senate Intelligence Committee, Ms Khar urged the lawmakers to understand Pakistan’s “priorities, concerns and constraints”.She said Pakistan wanted to have a genuine dialogue with the US on Afghanistan and was committed to “using the existing trilateral mechanism to promote an Afghan-led and Afghan-owned reconciliation process”.The mechanism includes the United States, Afghanistan and Pakistan.

“Instability in Afghanistan threatens Pakistan more than any other nation on earth. Pakistan is a critical part of the solution to the Afghan dilemma and the notion that Pakistan is part of the problem is wrong and must be corrected,” she said.The foreign minister assured US senators that a peaceful, stable and prosperous Afghanistan was central to both the short and long term interests of Pakistan.

Foreign Minister Khar was accompanied by Ambassador Sherry Rehman. On the US side, the committee’s chairperson Senator Dianne Feinstein, Vice Chairman Senator Saxby Chambliss and Senators Richard Burr, Dan Coats, Bill Nelson, M. Rubio, and James Risch attended the meeting.The foreign minister told the Senators that Pakistan attached great importance to its relationship with the US and the people of Pakistan wanted their contributions and sacrifices in fighting terrorism recognised and appreciated.

“It’s important that Pakistan’s priorities, concerns and constraints are better understood by the US,” she said.In an earlier meeting, she reviewed the state of economic collaboration and US assistance projects in Pakistan with USAID Administrator Rajiv Shah. Terming the US assistance an investment in the future of the relationship, she particularly appreciated USAID projects in the energy sector and road infrastructure.

Large signature projects, the minister pointed out, could be important symbols of the good that Pakistan-US partnership had brought to the people of Pakistan.She also stressed the need for timely release of funds and for greater coordination and synergy in project implementation between USAID and the Pakistan government.She said that Pakistan favoured early convening of the working groups on economy and finance, trade and market access, energy, and water, to intensify collaboration.Administrator Rajiv Shah apprised the minister of USAID’s operational difficulties in Pakistan and urged the government of Pakistan to address these to ensure smooth and effective delivery of the assistance.

Meeting with Ms Clinton
The State Department has said that Secretary of State Hillary Clinton and Foreign Minister Khar will discuss a full range of issues and expressed the hope that the bilateral talks will bring counter-terrorism cooperation “back up and running fully”.

State Department spokesperson Victoria Nuland told a briefing that the minister’s was a “long-expected visit and is not linked to protests in Pakistan and other Muslim countries over a blasphemous video”.Ms Khar, who is on a four-day official visit to the US, is expected to meet Ms Clinton On Friday.

Asked if the US-Pakistan strategic dialogue could be revived during this visit or on the sidelines of the UN General Assembly, the spokesperson said: “I know that the secretary and foreign minister Khar are going to be speaking. I don’t have anything else for you with regard to that.”Responding to another question, Ms Nuland said the US had been satisfied with the security arrangements Pakistan had made to protect US assets and personnel during protests against the anti-Islam video. – Dawn