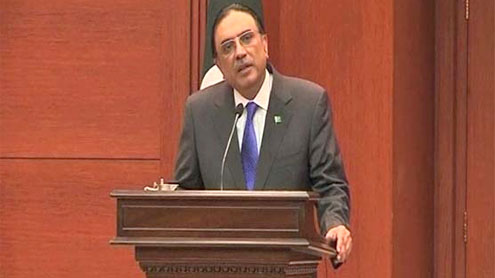 President Asif Ali Zardari will highlight the Muslims’ reaction against anti-Islam film during his address at the General Assembly today.

President Zardari held a meeting with Hillary Clinton on the sidlines of UN General assembly session in New York and apprised her about sentiments of Pakistanis against the anti-Islam film made in US.Clinton greeted Zardari as “my friend” and introduced him to the new US ambassador to Pakistan, Richard Olson, whom she said she had just been sworn in so he could attend their talks.

She also thanked him for Pakistan s handling of several days of violent anti-US protests, triggered by an amateur anti-Islam film made in the United States.”We very much appreciate the strong response of your government,” she said.Zardari said it had been “a difficult time for all of us.”Pakistan was rocked by days of protests in its major cities as demonstrations have swept Muslim countries in the Middle East, North Africa and South Asia over the film.

“One or two insane persons should not be allowed to endanger world peace in the garb of freedom of expression,” Zardari said in the meeting, according to a statement from the Pakistan embassy.US officials said the offer of a $100,000 bounty by Railways Minister Ghulam Ahmed Bilour for the killing of the maker of the film.”Innocence of Muslims” was denounced by the Pakistani leadership at the talks.

“As part of the delegation today was the leader of the party, the ANP, which the railways minister is part of, who also very explicitly disassociated his party from those statements,” the US official said.He said the party would meet soon “to decide what to do with that minister” as part of an internal process on how to deal with the situation, adding both delegations had echoed “that anyone who provokes violence cannot be tolerated.”The two leaders had also discussed the situation in Afghanistan, and how to cooperate in achieving stability there.

Peace and stability in Pakistan were tied to peace and stability in Afghanistan, he insisted. “No country has paid a higher price for the conflict in Afghanistan than Pakistan,” he said.He also called for Pakistani products, particularly textiles, to be granted better access to US markets.”Pakistan would rather do trade than depend on aid,” Zardari insisted. – Dunyanews