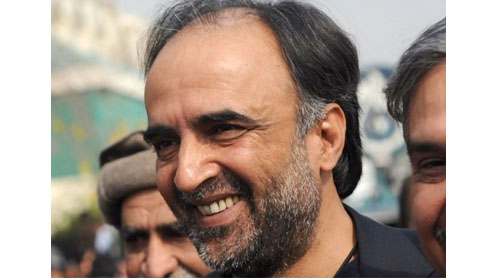 ISLAMABAD: Minister for Information and Broadcasting Qamar Zaman Kaira reiterated Thursday that general elections will be held on time and hoped to evolve consensus on formation of caretaker government prior to completion of the government’s tenure.

“Nobody should have any doubt that election will be delayed. Caretaker government will be in place well on time and every effort will be made to evolve consensus,” he informed media in front of Election Commission of Pakistan after ECP’s meeting with political parties.The minister appreciated ECP’s decision to continue consultation with political parties for evolving a mechanism for holding free and fair elections.

He reiterated the government’s resolve to provide technical support to ECP for holding free and fair elections. “Whatever responsibility the Commission will assigned to the government, we shall fulfill it.”When asked to further explain about fulfillment of responsibility, the minister said, from extending support he meant to assist the commission in forming error free electoral rolls, ensure funds etc as he clarified that present government, caretaker government and even the next government will be bound to obey the orders of the Commission.

Answering a question about formation of caretaker government, the minister said, opposition had leaked couple of names and ‘you are well aware about comments of Sardar Ata Ullah Mengal on their proposal. “If anybody acts like that just for point scoring, it meets the similar fate as in the case of Ata Ullah Mengal.”

He said this Parliament and the government will complete their tenure on March 18, 2013 and consultation process should continue for caretaker set up well on time. “Consultation is a constitutional requirement and we will consult our allies, opposition parties and even those parties who do not have representation in the Parliament.”

The minister said the government always opted to resolve issues through consultation even when there was tension and reaffirmed to resolve the matter of caretaker government with consensus.“If we could not evolve consensus, then there is laid down constitutional procedure for putting in place caretaker set up. There is nothing to worry about it,” he said.

To a question about representation of dual nationality holders in the Parliament, the minister said, Overseas Pakistanis are more patriotic than anybody else and always keep thinking about the welfare of the country.But, it is decision of the court and the constitution that they cannot be members of the Parliament.“It is beyond perception that dual nationality holders can be part of executive, judiciary, bureaucracy, security agencies, foreign office and nuclear program, but they cannot be members of the Parliament,” he stated.

On the issue of false declaration, Kaira said, the government respects decision of Supreme Court and Election Commission. But he observed that around 90 percent MPs could have not studied the provisions of article 62 and 63 in detail at the time of filing declaration.“My observation is that whether this mistake was committed by fault or deliberately. If any member filed false declaration mistakenly, then I feel that it should be looked into,” he said. – Dawn