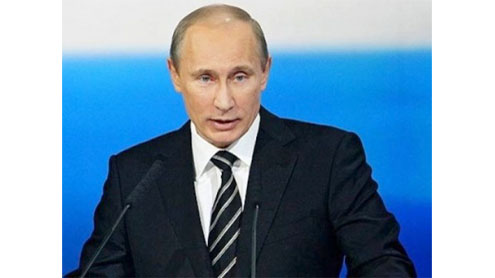 ISLAMABAD: The much-awaited visit of Russian President Vladimir Putin to Pakistan, which would have been the first by any top leader of what was once the world’s second superpower, has been postponed because of his other engagements for the same dates.

Following this development, the four-nation summit scheduled to be held here on October 2 and 3 also stands cancelled.Presidents of Afghanistan and Tajikistan were supposed to participate in the quadrilateral talks along with President Asif Ali Zardari and President Putin.New dates for these meetings will be decided through mutual consultations, the Foreign Office said on Thursday.

The FO statement said the Russian president has sent a letter to his Pakistan counterpart, expressing his eagerness to further develop Russian-Pakistani ties and trade and economic projects.“I am confident that in future we shall be able to find opportunities for arranging our personal meeting. We shall always be happy to receive you in Russia.” With the postponement of the Putin visit, cooperation talks between the two countries have also been delayed.

Russia had recently expressed willingness to help Pakistan triple the capacity of the Karachi-based Pakistan Steel Mills, which was set up with the cooperation of the Communist giant during the period of Gen Ziaul Haq.  At present, the project is facing serious problems and is producing only one million tons of steel every year.

Russia had also shown interest in investing $500 million in energy projects, including Iran-Pakistan gas pipeline. Russia’s state-controlled gas monopoly Gazprom has been interested in laying the Iran-Pakistan gas pipeline. Former foreign secretary Shamshad Ahmed, while talking to TheNation, said that the cancellation of the Russian president’s visit was very unfortunate and a setback to Pakistan.

He said since he did not know the real causes behind it, he would not like to offer any further comment. “It’s beyond my comprehension.”However, other diplomats think that something serious happened during the past few days as a result of which the Russian leader called off the visit.They said it happened at a time when President Zardari and Foreign Minister Hina Rabbani Khar were in the United States.

One diplomat was of the view that relations between Pakistan and Russia had been very tense for the past several decades because of the Islamic Republic’s tilt towards the United States ever since it gained independence from the British rulers and Islamabad’s role in Afghanistan after the Soviet invasion.Some people speculate that India could have played any role to sabotage the plan to improve Pak-Russia ties.There are also reports that the Russian leader called off the visit because of security concerns. – PT