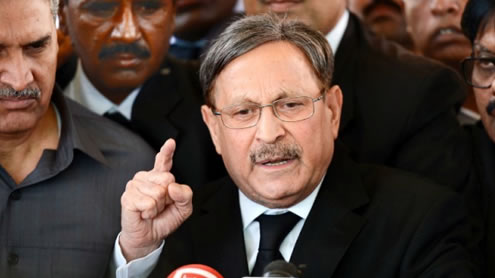 ISLAMABAD: The Supreme Court on Friday, while expressing dissatisfaction over the fresh draft of the letter that the government is to send to the Swiss authorities for the reopening of the graft cases against President Asif Ali Zardari, gave five more days to Law Minister Farooq H Naek to improve its contents.

On the other hand, the law minister has refused to give any commitment for further improvement in the proposed letter. A five-member bench of the apex court, headed by Justice Asif Saeed Khan Khosa, observed that most of the issues had been sorted out in the draft communication but some aspects need to be attended to by the government.

It has been learnt that the deadlock between judiciary and executive over the immunity issue has not been resolved. While talking to reporters, Naek said the constitution gave “complete immunity” to Zardari. “The constitution is very clear on the issue of immunity. Under Article 248(2), the president, as head of state, has complete immunity and protection against any criminal proceedings as long as he is in office,” he said. Justice Asif Khosa observed that they were only “inches away” from the perfect solution that would uphold the dignity of the court and also address the government’s concerns. “We have in the last hearing said that it is the last opportunity, but don’t want the efforts to go waste,” noted Justice Khosa.

The court had in the last hearing of the case given final opportunity to the government to revise the draft letter by October 5 in accordance with the directions given in the para 178 of the NRO judgement otherwise contempt of court proceeding would be resumed against Prime Minister Raja Pervez Ashraf forthwith. At the onset of the proceedings on Friday, the law minister submitted the revised draft letter in the court and said it had been prepared as per the observations of the court and para 178 of the NRO judgement.

“I am appearing as the representative of the government and not as private party,” he said in the court. Reading a written statement, he said it is in the interest of the country that the system goes on and for that there was a need to work in unison. The country is facing many challenges, he said, adding it was time to rise above personal interests and work for the interests of the country.

After examining the letter, Justice Khosa observed, “We have pondered deeply over the draft and found first two paras of the letter in consonance and the spirit of the para 178 of the NRO judgement, but the last paragraph goes contrary to what has been written in first two paras.” The law minister requested adjournment to consult the prime minister on the court’s observations. Granting the request, the court adjourned the case until October 10. Meanwhile, talking to media at the SC premises, Naek said the first two paragraphs of the letter to be sent to Swiss authorities were in accordance with the Supreme Court’s directives. According to Naek, the judges hearing the case expressed their reservations regarding the draft of the letter and he and his client expressed their reservations as well.

He said a decision over the final version of the letter was yet to be taken. The letter, he added, had been drafted in accordance with the apex court’s directives and had also been approved by the prime minister. Naek reiterated that the constitution was clear on the issue of presidential immunity. Moreover, he said that any decisions that will be made would be in the greater national interest. He said in democracies, decisions could not be made without consultations, and added that the government would remain flexible in resolving the matter. – Dailytimes