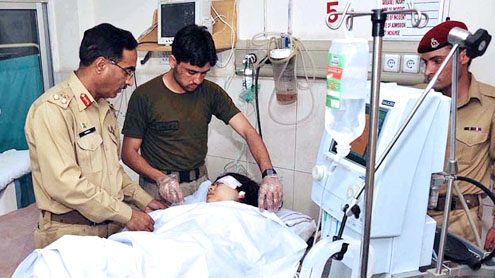 PESHAWAR: Pakistani doctors were to decide Wednesday whether to fly abroad a 14-year-old child activist in a critical condition after being shot in the head by the Taliban, in a case that has horrified the country.

Doctors successfully operated on Malala and removed the bullet lodged in her neck, Media reported on Wednesday.Malala Yousafzai was shot on her school bus with two friends in the former Taliban stronghold of Swat on Tuesday, then flown to the main northwestern city of Peshawar to be admitted to a military hospital.

Malala spent Tuesday night in intensive care, where doctors at the Combined Military Hospital (CMH) described her condition as critical.A military officer told AFP that a team of top doctors had flown to Peshawar to assess her condition on Wednesday.

“They have a two-point agenda — to determine if Malala Yousafzai’s condition allows her to be shifted abroad for treatment or if she needs surgery here,” the officer said.Last night, a doctor at CMH told AFP that the bullet had travelled from her head and then lodged in the back shoulder, near the neck.“She is in the intensive care unit and semi-conscious, although not on the ventilator,” he told AFP on condition of anonymity because he is not authorised to speak to the media.The next three to four days would be crucial, he added.

State carrier Pakistan International Airlines told AFP that it had a Boeing 737 ready at Peshawar airport to fly Malala abroad if necessary, most probably to Dubai.“We are waiting for new orders and as soon as we get the instruction she will be flown abroad,” PIA chief Junaid Yusuf told AFP.Malala won international recognition for highlighting Taliban atrocities in Swat with a blog for the BBC three years ago, when the Islamist militants led by radical cleric Maulana Fazlullah burned girls’ schools and terrorised the valley.

Her struggle resonated with tens of thousands of girls who were being denied an education by Islamist militants across northwest Pakistan, where the government has been fighting local Taliban since 2007.She received the first-ever national peace award from the Pakistani government last year, and was nominated for the International Children’s Peace Prize by advocacy group Kids Rights Foundation in 2011.

Tuesday’s shooting in broad daylight raises serious questions about security more than three years after the army claimed to have crushed a Taliban insurgency in the valley.The Pakistani Taliban claimed the attack in a series of telephone calls to reporters and then issued a strongly-worded statement justifying the attack on a child on the grounds that Malala had preached secularism “and so-called enlightened moderation”.The Taliban controlled much of Swat from 2007-2009 but were supposedly driven out by an army offensive in July 2009.

“It’s a clear command of sharia that any female, that by any means plays a role in war against the mujahedeen, should be killed,” said spokesman Ehsanullah Ehsan.He accused the media of pouring out “smelly propaganda” against the Taliban, saying that women had also been killed in Pakistan military operations and were detained by the intelligence services.Prime Minister Raja Pervez Ashraf telephoned Malala’s father to condemn the attack and promise that the government would pay for all medical treatment.

President Asif Ali Zardari said the shooting would not shake Pakistan’s resolve to fight Islamist militants or the government’s determination to support women’s education.The United States denounced the “barbaric” and “cowardly” attack.Amnesty International condemned the “shocking act of violence” against a girl bravely fighting for an education, saying that female activists in northwest Pakistan “live under constant threats from the Taliban and other militant groups”.Malala was 11 when she wrote the blog on the BBC Urdu website, which at the time was anonymous. She also featured in two New York Times documentaries.

English-language Pakistani newspapers also reacted with horror to the shooting, which it said once again spotlighted the Islamist militancy scourge in Pakistan.“Malala Yousafzai is in a critical condition today and so is Pakistan. We are infected with the cancer of extremism and unless it is cut out we will slide ever further into the bestiality that this latest atrocity exemplifies,”wrote The News.

Despite sporadic outbreaks of violence, the government is trying to encourage tourists to return to Swat, which had been popular with holiday makers for its stunning mountains, balmy summer weather and winter skiing.On Wednesday, state carrier took journalists on a test flight to Saidu Sharif, Mingora’s twin town, for the first time since flights were suspended due to the insurgency. – Dawn