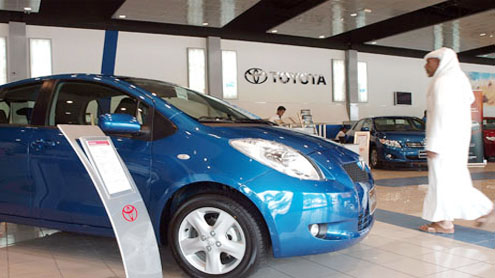 Japanese auto giant Toyota is recalling more than 65,000 cars sold in the UAE over safety issues in its power master window switch.

Globally, Toyota Motor is recalling 7.43 million vehicles on the same safety issue that affects more than a dozen models produced from 2005 through 2010.In the UAE, customers of 65,085 units will be contacted for a safety campaign. The affected models include the Corolla, RAV4, Sequoia, Yaris and Toyota’s best-selling Camry sold between February 2006 and May 2010, according to Al-Futtaim Motors, the sole distributor of Toyota vehicles in the country. “Following communication with Toyota Motor Corporation, we have begun a customer service campaign on the power master window switch on some vehicles in the Toyota range,” Simon Frith, managing director of Al-Futtaim Motors, said in a statement on Wednesday.

The purpose of this campaign is to inspect the sliding electrical contact module in the driver’s side Power Window Master Switch, or PWMS, Frith said.“If customers have applied commercially-available lubricants to address any sticky feeling of the switch, it is possible that the switch could melt,” he added.“We will commence a service campaign from October 10, 2012 and contact our customers directly for an appointment at our service centres. All vehicles will require a 45-minute inspection.  Should any lubricant be required to be applied, the team will apply correct lubricants to the PWMS,” he added.

Japan’s biggest auto maker has been trying to fix its reputation after a series of massive recalls of 14 million cars over several years. Japan’s top car manufacturer recalled 7.7 million vehicles across the world in 2009 and 2010 targeting floor mats. – Khaleejtime