Malala sent to Britain for treatment:ISPR 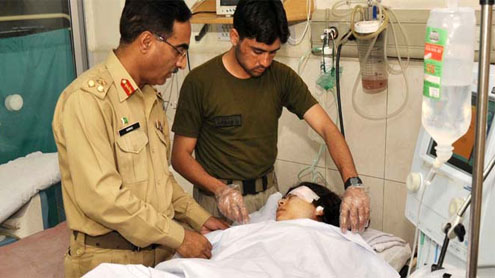 Malala sent to Britain for treatment:ISPR

ISLAMABAD: Malala Yousufzai, the 14-year-old girl, who was wounded in a Taliban attack last week was sent to the UK for treatment, according to a statement issued by the Inter Services Public Relations (ISPR) on Monday.

The decision to send Malala to the United Kingdom had been taken after consultations with her family members and all expenses for her treatment would be borne by the Government of Pakistan, the statement further added.Earlier on Monday, an air ambulance had arrived from the United Arab Emirates (UAE) to shift Malala abroad as part of the contingency plans.

The government had said that the royal family of the United Arab Emirates had planned to send an air ambulance for the 14-year-old schoolgirl in case doctors decided to send her abroad for treatment.Meanwhile, an ISPR statement on Sunday said that Malala had been taken off the ventilator for a while today, DawnNews reported.