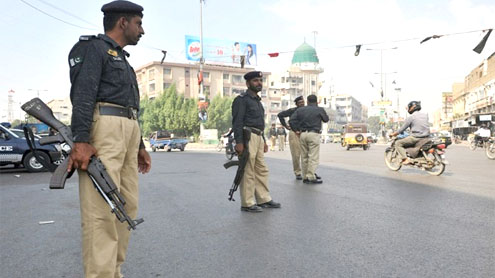 KARACHI: The Anti Violent Crime Cell (AVCC) in collaboration with Citizens Police Liaison Committee (CPLC) on Tuesday claimed to have recovered a businessman from the custody of kidnappers after an encounter at Maripur area, while three alleged kidnappers were also killed during the encounter.

The AVCC and CPLC team on a tip-off conducted a raid at a house in Javed Bahria Housing Society, Maripur area in the wee hours, where kidnappers seeing them opened indiscriminate fire. Police also resorted to retaliatory gunfire as a result, the encounter occurred between police and kidnappers.

A heavy exchange of crossfire continued for hours, resultantly three alleged kidnappers received fatal bullet wounds and died on the spot, while two policemen Maroof and Jamshed were also wounded. They were rushed to Civil Hospital Karachi (CHK) for treatment, where doctors termed their condition stable. The AVCC and CPLC officials cleared the house after the killing of three kidnappers. Their identities could not be ascertained yet.

However, AVCC and CPLC officials safely recovered the abducted businessman, identified as 76-year-old Malik Zainul Abdeen, from the house. The abducted man was the father of Malik Imran, an ex-member of the Khyber Pakhtunkhwa (KPK) Assembly and a well-known oil trader. Abdeen was abducted on 13th August from Clifton, and kidnappers had demanded Rs 200 million ransom from his family for his release.

CPLC Chief Ahmed Chinoy, while talking to Media, informed that the negotiations between the family and the kidnappers were finalised at Rs17 million ransom after which the police managed to trace the location of the kidnappers after the hectic efforts of 64 days. He said that the kidnappers used to call the family from different localities, including Waziristan, Peshawar and its neighboring areas.

He said that a rented vehicle AMB 901 was also recovered and the house was rented. AVCC Chief Niaz Khoso said that it was clear that the kidnappers belonged to one of the militant groups, but it was yet to be ascertained either they belonged to Tehreek-e-Taliban Pakistan (TTP) or any other militant group. Police also claimed to have seized three Kalashnikovs and three pistols
from their possession.