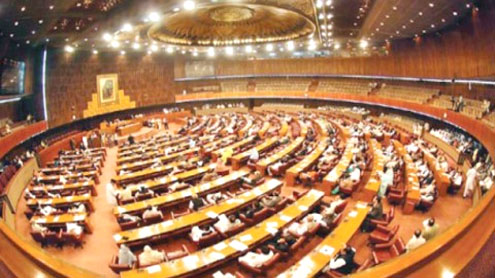 ISLAMABAD: The National Assembly on Tuesday finally passed a bill for the establishment of the Drug Regulatory Authority (DRA) of Pakistan after the opposition accepted the government’s assurance of not appointing a dual-national as the authority’s head.

As Deputy Speaker Faisal Karim Kundi took up the Drug Regulatory Authority of Pakistan Bill 2012 for the final reading, Pakistan Muslim League-Nawaz’s Zahid Hamid said the opposition would not press against the removal of the word ‘only’ from a clause of the bill if the government assured that the amendment was just meant to correct a grammatical error.The question of dual nationality, which is being hotly debated in several forums in Pakistan, hit the NA on Monday when the Lower House was midway through voting on the bill’s clauses.

The bill was deferred after the PML-N broke the house quorum by having several of its back-benchers sneak out of the chamber after a lawmaker of the MQM, a coalition partner, refused to withdraw his amendment seeking deletion of the word ‘only’ from a clause that requires the chief executive officer or a director of the proposed authority to be a Pakistani citizen.

The clause had stated, “No person shall be appointed as the CEO or director of the authority unless he is a citizen of Pakistan only.” Opposition lawmakers had insisted that the removal of the word ‘only’ seemed to be paving the way for the induction of people with dual nationality who could serve the interests of foreign pharmaceutical companies.

“What would happen to 10 million overseas Pakistanis if we put such restrictions? Dr Abdul Qadir Khan also held dual nationality when he gave nuclear power to the country,” chief whip Syed Khurshid Shah said, adding that Article 62 of the constitution also contained the same expression and that neither the government wanted to adopt the amendment nor was it doing so on anyone’s behest.

However, Minister for National Regulations and Services Firdous Ashiq Awan assured the House that the amendment was of grammatical nature and had nothing to do with the appointment of any dual national. Minister for Law Farooq H Naik also said the Article 62 also stopped at word ‘Pakistan’ that dealt with the qualification of the prime minister and the president.

According to the bill, the DRA would bring harmony in inter-provincial trade and commerce of drugs and therapeutic goods to regulate, manufacture, import, export, storage, distribution and sale of therapeutic goods, medical devices and drugs research.The DRA would advise the federal government on the issues relating to the obligations and commitments with international organisations related to therapeutic goods like drugs and medicine.Moreover, the authority will also develop ethical criteria for drug promotion, marketing, and advertising.Later, the deputy speaker put forth the bill for passage that was adopted with majority a vote. – PT