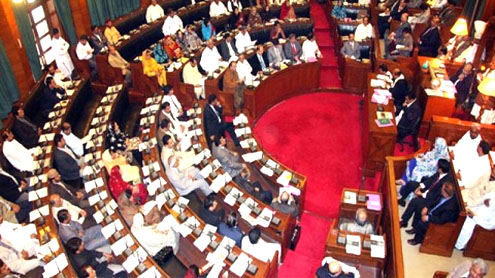 KARACHI: Ruckus and walkouts marred the proceedings of the Sindh Assembly on Thursday in the wake of Sindh Governor Ishratul Ibad’s approval of the Sindh People’s Local Government Bill.

The uproar ensued when Speaker Nisar Ahmed Khuhro announced that the Sindh governor had given assent to the Bill. Opposition members raised splitting slogans of ‘shame, shame’ and tore the agenda of the day, calling the treasury members traitors of Sindh.Opposition members wore black armbands as a mark of protest against the new local government law. It was the longest protest day in four-and-half year span of the assembly in which the opposition staged four walkouts.The female duo of Pakistan Muslim League-Functional, Nusrat Abbasi and Marvi Rashdi, were most vociferous and active in the protest. The first walkout was staged over the allotment of opposition seats to the PML-F, the Awami National Party and the National People’s Party members along with a PML-Q legislator.

They returned to the house after a while.Speaker Nisar Khuhro allotted eight seats to the opposition members, six for PML-F members and one each to ANP and NPP legislators. However, four ministers Jam Madad Ali and Rafique Bhanbhan of the PML-F, Sheharyar Mahar of the PML-Q, and Amir Nawab of the ANP were not allotted seats on the opposition benches. The speaker said that they were ministers and could not sit on opposition benches until the approval of their resignations.Protesting over speaker’s observation, the opposition members again staged a walkout.

The third walkout came when the speaker announced the People’s Local Government Bill had been approved by the governor. Hearing that, the opposition rose in protest and chanted slogans at the peak of their voices. The protesting legislators tore the agenda and stalled the proceedings for more than half an hour.Harsh words were exchanged between Sindh Finance Minister Murad Ali Shah and PML-F member Nusrat Sehar Abbasi. Murad Ali Shah, who was speaking on the floor, was distracted by PML-F member Nusrat Abbasi who, along with her colleagues, had returned to the house. Sindh Local Bodies Minister Agha Siraj Durrani alleged that Abbasi took up his official files from his desk and tore them into pieces.

He said that opposition has the right to protest which they had exercised but listening to the ministers was also their responsibility. Law Minister Ayaz Soomro said that the opposition members were behaving like crazy and such behaviour should be treated in mental asylum. Deputy Speaker Shehla Raza said that those who don’t have arguments, speak loud, adding that female members of the opposition were acting like Benjamin sisters.The opposition staged fourth the walkout when the house took up the remaining agenda. Sindh Law Minister Ayaz Soomro tabled Jinnah Medical Hospital Bill which was discussed and passed into the law.

Earlier‚ speaking on the law and order situation of the province, Chief Minister Syed Qaim Ali Shah said the government was mobilising all possible sources to control the law and order situation in the province‚ particularly in Karachi.Speaking on the floor, MQM deputy parliamentary leader in Sindh Assembly Faisal Subzwari said that law and order situation of the metropolis was being deteriorated under a planned conspiracy. “Earlier peoples were killing each other on ethnic grounds, now the same thing is being done on sectarian and religious ground.  After completion of agenda, Speaker Nisar Khuhro adjourned the session until November 30. – Nation