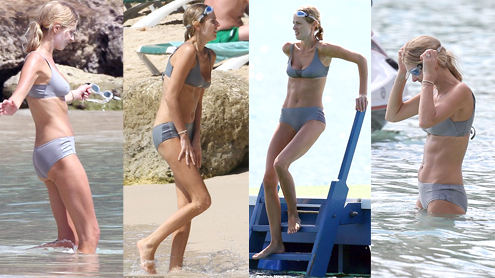 For anyone feeling unmotivated to watch what they eat between now and Christmas, these photos of Donna Air should help.

The TV presenter-slash-model was looking incredibly toned as she soaked up the fine weather in Barbados.Donna, 34, was wearing a dove grey bikini for her trip to the beach, and even though the bottoms were Bridget Jones style big knickers, she still looked coltish as she splashed in the sea.Donna once told the Daily Mail: ‘If I could swim in the sea every day I’d be a very happy girl’, so it was no surprise to see her looking relaxed and content as she paddled in the azure waters.

The stunning blonde is holdaying with her latest beau, Sam Goldstone, who she is believed to have started dating earlier this year.She’s been sure to keep her Twitter followers up to date with her trip, and last week told them that she had been enjoying rum punch.Yesterday she wrote: ‘Nearly time to hit beach for last few hours sun this year! But looking forward to getting back for a very exciting week.In the past, the Byker Grove star has been linked to playboy Calum Best and millionaire Damian Aspinall, with whom she has a daughter Freya, 9.

But there was no sign of either her daughter or her boyfriend as she made the most of the warm Caribbean Sea.Donna looked amazing in her bikini, which was cut from a dove grey material that had a slight shimmer.The full briefs showcased her endless, toned legs, and the top half gave full coverage without looking frumpy.She accesorised with a gold Sweetie bracelet from Links of London and a much less expensive pair of swimming goggles.

Her blonde hair was tied back in a loose ponytail, and she didn’t seem concerned about getting it wet as she swam around.Donna is best known for her time on Byker Grove, the Newcastle-based children’s TV show that she starred in alongside Ant and Dec.Since then, she has carved a name for herself as a charity campaigner and TV presenter.The actress was involved in two accidents that left her wheelchair bound with two broken legs in 2011.However, it seemed like she was officially back to full strength as she climbed up and down a ladder to a floating platform, and swam around carefree. – Dailymail