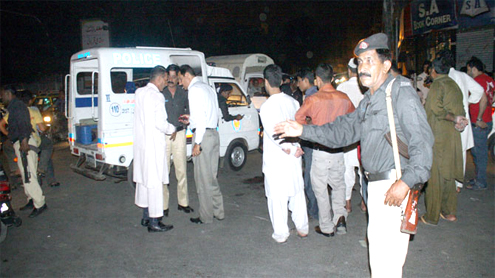 KARACHI: Karachi Police claim to have thwarted a terror bid by recovering a large quantity of explosive material and arms in the city’s Manghopir area, Media reported.

According to the police, a raid was conducted in Manghopir after an anonymous tip-off was received. During the raid, police searched a car in the area in which they found explosive material.  IG Sindh Fayaz Laghari told a press conference that during the raid a terrorist had also been killed and two suicide jackets had been recovered.

Laghari said that the terrorists were planning to join the Muharram procession as mourners and then would have carried out the attack in the middle of the crowd.He said that the arrested terrorists were being investigated and preliminary investigations indicated that the group to which they belong may also have been responsible for the Abbas Town bombing. – Dawn