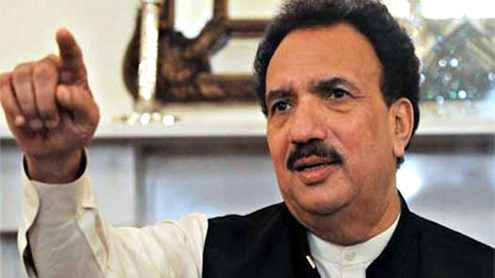 Speaking to media representatives in Islamabad, Malik said Ehsan was working for foreign elements and vowed to soon reveal all on the TTP spokesman.The minister added that the TTP was a divided organisation and now constituted of various groups, including the Waliur Rehman faction, the Hakimullah Mehsud group and other small factions.

Malik moreover questioned as to what kind of shariah the TTP spokesman wanted to enforce in the country which legitimised the killings of innocent civilians and sanctioned suicide bombings.He said “terrorists” were defaming the religion and shariah for money, adding that, the government had struck a peace agreement with the Taliban in Swat which the latter had themselves violated.Malik added that if “terrorists and miscreants” surrendered and gave up their weapons, the government could consider giving them amnesty. – Dawn