Computerisation of over 400,000 arms licences soon 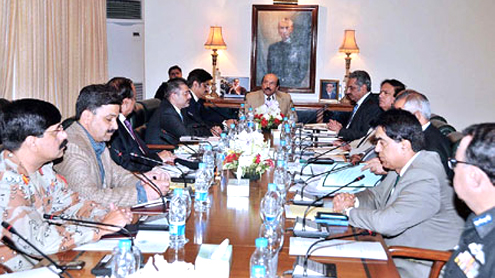 Computerisation of over 400,000 arms licences soon

KARACHI: Sindh Chief Minister, Syed Qaim Ali Shah, on Tuesday presided over a high level meeting on law and order in the province, preferably in Karachi, at the Chief Minister House.

According to an official handout, the meeting discussed various issues, progress, performance and achievement of Home Department, police, rangers, law department, prosecution department and LEAs. It was informed that during the period 2008 to 2012, there is 39.75% conviction of criminals by various courts in the province and 15798 cases are lying pending. The chief minister said that there is need of amendments in certain laws including arms act.

It was decided to form a committee comprising Home Secretary Sindh, Advocate General Sindh, Prosecutor General Sindh and Law Secretary, which will consult with federal law minister and will suggest such amendments early, so as to place the same before the Sindh Assembly to get passed them.It was decided that the process of police verification of arms licences had been initiated and process of computerisation of arms licences would be further enhanced.

The meeting was informed that more than 400,000 arms licenses had been issued in the province, while an amount of Rs 750 million had been paid to NADRA for installation of computerised system in home department and at all divisional & district headquarters. The owner of arms licence will go to nearer NADRA office and will fill up necessary form, which will be verified by respective SP office.Besides Karachi, such machines have been installed at Hyderabad and Larkana. The meeting was informed that there is flow of unlicenced weapons in the province and Tando Allahyar has become BARRA of sale and circulation of illegal weapons. It was informed that there was a huge quantity of unlicensed and illegal weapons.

The chief minister decided that police, rangers and other law enforcement agencies should have crackdown against those criminals and unauthorised shops indulged in sale of unlicensed/illegal arms and ammunition.The meeting was informed that through survey of bank branches, it was known that about 90% security guards are untrained and cannot cater to the needs of security.

It was decided that Sindh police would recruit 200 persons having degrees of law, who will be trained and assigned task of investigation and process of legal requirements.It was further decided that like old city areas, the SITE area will be provided prompt security and community policing will be encouraged. It was decided to take legal action against those who will take law into their hands and create problems to people of province. Other issues were also discussed. – Dailytimes