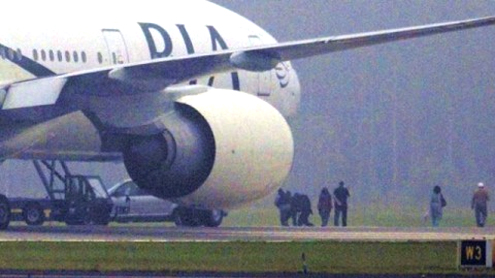 KARACHI/ISLAMABAD: A PIA flight with Chief Justice Iftikhar Muhammad Chaudhry, and some ministers and parliamentarians on board, was aborted just when it was going to take off from Karachi on Sunday.

Authorities said that the Boeing 747-300 plane, engaged for flight PK-308, encountered a technical fault but strongly rejected reports about breaking out of fire and suffocation to passengers due to smoke.Other than the CJP, around 14 prominent personalities including Federal Minister Maula Bux Chandio, MNAs Yousuf Talpur and Shirin Arshad, Production Secretary Gul Muhammad Rind and Roedad Khan were also on board the Islamabad fight.The plane, with 421 passengers, was scheduled to depart from Karachi at 5:15pm. Sources said that the CJP and the other VIPs later reached the federal capital in another PIA flight, PK-370, at 7pm while the defaulted PK-308 departed at 7:55pm after technicians removed the fault.

Pakistan International Airline (PIA) Spokesman Sultan Hassan said that neither the plane caught fire nor there was any smoke, nor had the plane taken into the air when the problem was detected. The news reported by a section of electronic media is totally baseless and misleading, he added. Civil Aviation Authority (CAA) Spokesman Pervez George also said there was no fire on the plane.

He said that the scheduled time of PK 308 was 4pm however the flight was delayed for an hour due to technical reasons. When the plane was ready for departure at 5pm, one of its four engines did not start, he said.Upon this the flight was stopped while the plane was on the ramp and the plane was brought back into parking and the passengers safely disembarked, he said, adding that almost all of the passengers, 402 in number, later reached their destination in the same plane after removal of the minor fault.

In October, the chief justice had summoned PIA officials after his flight to Karachi was delayed by more than three hours. On Sunday also, some media reports said that the CJP had taken notice of the matter and quoted him as telling the PIA authorities to take measures to prevent such incidents from recurring. But the PIA spokesman rejected that the chief justice had taken any notice.But in Islamabad, Defence Minister Naveed Qamar did take notice of the incident and called for an emergency meeting of higher officials of the PIA on Monday. “Defence Minister has taken notice of incident and asked higher authorities of national carrier to give him a detailed briefing about the incident,” a spokesperson for minister said on Sunday.

PIA MD Muhammad Junaid Yunus said that safety of passengers is of paramount importance and a flight is not dispatched unless PIA is hundred per cent sure of the safety. Unqualified and ungrounded statements not only financially damage the national carrier and its brand, but also demoralise its 18,000 hardworking employees.To make such a big issue of a minor technical fault is uncalled for and only serves to erode the trust of “our valuable passengers” that its employees are endeavouring to build, he said, adding that the PIA personnel were working hard to raise the national carrier’s image.

PIA Spokesman Sultan Hassan said that a ramp return is a routine even for all airlines of the world, “as frequent travellers would know and we at PIA encourage our crew to remove all doubts before every flight for the safety of the passengers. It is better to be safe on ground than exposing ourselves to any abnormality or emergency in the air.”

CAA Spokesman George said that after rectification of the snag and when the aircraft was cleared by engineering, the same aircraft with the same engines departed for Islamabad within two hours and twenty minutes – including embarkation and disembarkation of more than four hundred passengers. If it had been fire or some major fault, the engine would have been removed and new engine installed. Hence it would have taken several hours or a day for same aircraft to depart for any flight, he added. – Nation